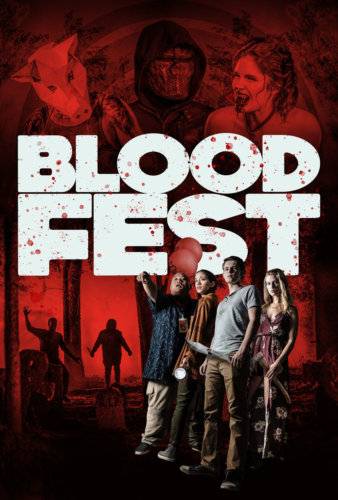 Blood Fest essentially does what it seeks to do, and thatâ€™s be fun and entertaining. We get a group of fun and pretty likable characters who love horror and discuss it often. The massacre starts up pretty quick and with a pretty great slaughter sequence of several people. We then follow the core group as they must survive against various horror movie villains such as masked killers, zombie, vampires, etc. Of course each one gets killed off one by one. All of the deaths in this movie bloody and gory in some of the best ways, even if the deaths themselves arenâ€™t the most inventive. The cast all appear to love the movie their in and having a blast doing this, even the weaker performances are far from bad because of this.

It also features some pretty humorous moments. One I particularly enjoyed was a character obsessing over Zachary Levi (as himself) being the voice of Flynn Rider in Tangled. The downside of the movie is that this is essentially a lesser version of Cabin in the Woods. We have famous horror villains on the loose killing off the teens in horror movie fashion and in tropes, all while being surveyed and tracked by people in labs. Whatâ€™s even more unfortunate is that the twist of the movie is so predictable it can easily be called within the first twenty minutes of the movie. Sure this is just supposed to be fun horror movie and realism should be thrown out the window, but you canâ€™t help but question how all of this was executed so perfectly by the filmâ€™s villain. Itâ€™s just unrealistic how well it was pulled off. Despite these flaws, itâ€™s still a fun film that is worth watching at least once.