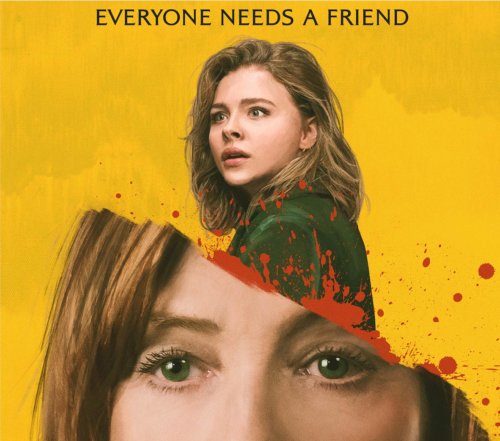 After finding a purse on the subway, a young woman tracks down the owner and returns it to her. Discovering that the woman is pretty lonely, and having lost her own mom, Frances develops a friendship with Greta. But she soon discovers that Greta is harboring a twisted secret, and she’s not ready to let go of Frances.

Greta serves as a watchable, but also average and forgettable stalker flick. The biggest strength of the film lies in the cast. Chloe Grace Moretz, whom I normally don’t find a very good actress is actually very serviceable here. She captures the naivety and sincerity of Frances well, and she pulls off her fear and dramatic scenes without doing technique of over-acting like she typically does. Isabelle Huppert as the titular character is fantastic and brings the great amount of creepiness to her role with how subtle she can be. She does have her outburst moments that work well too, but it’s the lighter moments that are the most effective. And then we have Maika Monroe as the voice of reason as Frances’ roommate and best friend Erica. Erica is easily the most likable character because of not only being the sensible one, but she’s also the fun and pretty reliable friend, and she definitely has her bad ass moments in this movie. Monroe nails the comedic elements, and when she gets into defensive mode when she has to face Greta and defend Frances, you are hardcore rooting for her. This is ironic because you find yourself rooting for Erica more than caring about Frances, but this isn’t entirely uncommon for horror/thriller films.

The movie does feature some fairly intense and creepy moments, one being a chase scene involving Erica, and then towards the end when you find yourself worrying about the well-being of a particular character. Other than that however, much of the movie you’re mentally shouting at some of the characters for the poor decisions they’re making. Along with that it also feels tonally confused. Initially it comes off a more “serious” thriller, but lacking a lot of the thrills. And then at some points it switches gears to become campy and goofy, one scene in particular involves a dance that Greta does. This comes off as more as more comedic than anything and not in a good way. When it comes to stalker films you have two options, make it creepy and thrilling like Cape Fear, Fatal Attraction or Fear, or go full-on camp like The Boy Next Door, Obsessed, or The Roommate. You really can’t do both without making it look ridiculous. In all honesty, this was a rather dull stalker film that’s only backed by strong performances and just a couple of intense scenes, and it’s very well-filmed. The most unforgivable thing about the movie is the fact that it basically includes a dog that only exists just to have the “harm the pet” cliche. Which is not okay. And the fact that the dog is adopted by Greta, whom Frances helps select, is next on the pound’s list to be put down. Animal deaths like this are cruel enough in film, but under circumstances like this is just mean-spirited and senseless. Okay, rant done. By the end of Greta, it leaves us with an unsatisfied and ambiguous ending that makes you groan. And on top of that we have Frances’ father who becomes a prominent figure as the story progresses, but then he’s literally forgotten about with no real closure between them.

Overall, I’d say Greta is worth watching if you are into films like it. It’s not particularly thrilling, nor is particularly fun, but it’s a decent enough time-killer if you happen to find it on Netflix or want to rent it for two bucks at Redbox. It at least has the saving grace of solid performances, so if you’re a fan of the cast then I do highly recommend it in that case.