As mentioned before, Slasher Studios Horror Film Club is taking on the overrated horror movies of the genre. Movies that, for whatever reason, we just never warmed up to. John Pata has decided to take it one step further. He is hunting down a director that genre fans LOVE but he has a few problems with. Are you ready for this John? This might not be pretty…. 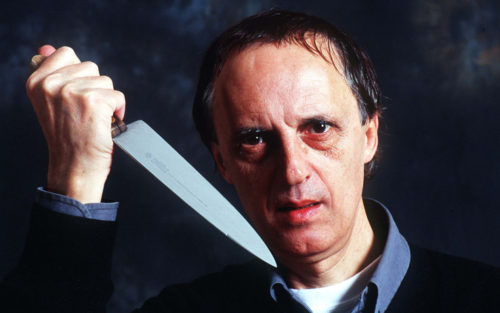 Stepping away from the original idea, so instead of going with one film in particular, I’m going with a director: Dario Argento (if we wanted to narrow it down to a film, I’ll go with Suspiria). I must not have the Argento-gene, I know many people who love Argento’s films, and I just cannot get into them. I will say, I have not seen ALL of his films, but a fair amount. To be exact, I have seen: Deep Red, Suspiria, Inferno, Tenebre, and Phenomena. Funny thing is, I’m a big fan of Demons, which Argento co-wrote. So apparently I can tolerate and enjoy when he is not behind the camera.

So what about Argento don’t I enjoy? Well, for starters, Italian horror is hit or miss with me. Most of the time, gore is the focus which is completely fine with me, seeing how I love gore. Usually the writing is crap, the acting is flat, the pace is slow as hell, and the gore is the redeeming factor. This is very true for the Italian flicks I do like, Burial Ground and Night of the Zombies as examples. I find Argento’s titles to be prime examples of this, too. It might not make sense for me to be okay with the lesser qualities in some Italian films, but not with Argento. I understand that, and I think what it boils down to is that some of these titles are held in such high regard. It’s not like people gush about Beyond The Darkness being one of the best horror films. But when Suspiria gets all the praise, I am dumbfounded.

I must also say, I am not much of a fan of art films, and Argento definitely has more of an artsy feel that other Italian directors. For me personally, it’s hard for me to see anything but pretentiousness behind an art film.

I wouldn’t go as far as saying, “I don’t understand why people like Argento”. Different strokes. He’s just not for me at all.