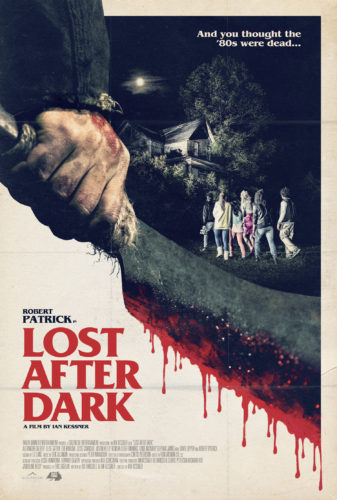 During the night of their school dance, a group of teens decide to ditch. In the process, they steal a school bus and take it to find a new place to party. Along for the ride is the shy Adrienne (Kendra Leigh Timmins) who joins to group to get close to her crush Sean (Justin Kelly) along with his crew. During the joy ride, the bus breaks down and the group finds themselves stranded. When they venture to a nearby farmhouse, they cross paths with a vicious killer they know from an urban legend.

Lost After Dark is directed and written by newcomer Ian Kessner, whom brings his first full length film after a handful of short films. There is no question about it that Kessner is a major fan of the genre and was hell-bent on bringing a throwback film to 80s slashers that works. And it sure as hell works. For starters, the production value screams 80s in the most perfect way possible and features aspects of grind house pictures as well. Granted one aspect involving a “missing reel” did leave me a little disappointed as far as continuity for the scene and the character. The story itself is also very 80s slasher style, but it blends the terror of both 80s horror and the horror of today to make it appeal to both. However, I will say it will only appeal to huge horror fans who are exposed to more than just today’s modern horror. The characters themselves couldn’t be more stereotypical if it tried. And this isn’t a bad thing, because it is extremely self-aware of this fact, and not only does Kessner own this, but so do the actors. We have our straight A good girl, the kind hearted jock, the feisty but kind best friend, the dim-witted blonde, her asshole boyfriend, the token black guy, the pitiful geek, and the rebellious girl. Each actor really sells their role as the stereotypes, albeit a little over-the-top at moments, but those moments just add more comedy to the story.

The cast also plays off of each other really well and seem to be having a great time with it. Also worth mentioning is Robert Patrick as the teens’ Vice Principle who delivers a top-notch and very funny performance as the disgruntled but determined authority figure and steals every scene he’s in. When the story gets going it doesn’t let go, it perfectly builds up and gives plenty of room between kills. And I have to say, the kills in this were fantastic and gory, very pleasing to slasher fans. The killer at hand here, Junior Joad, is pretty terrifying, not only in his appearance but also that he shows no mercy whatsoever. He’s a cold blooded killing machine. I very much got a Texas Chain Saw Massacre/Friday the 13th vibe from Junior and the whole story. Now, my favorite aspect of the film was that it does an EXCELLENT job pulling the rug from under the viewer. Kessner perfectly executes the ability to leave us guessing just who will come out alive. Everyone is an easy target, and anyone could potentially make it out. This is what sets is apart from many slashers, it has the stereotypical elements, but it gets flipped in the most unexpected ways. Finally, there is the excellent use of location. The farmhouse and the lands/woods around is very eerie and it uses all of the locations around to its advantage.

Lost After Dark is the perfect throwback to 80s slashers while also bringing something new to the table. Everything that’s supposed to be cheesy and predictable about it works so much in its favor. The director/writer and the cast knew what they had in front of them and definitely knew what do with it. It’s easily one of the best slasher films I’ve seen in a long time. But that doesn’t mean it doesn’t have its faults either that trip it on occasions.