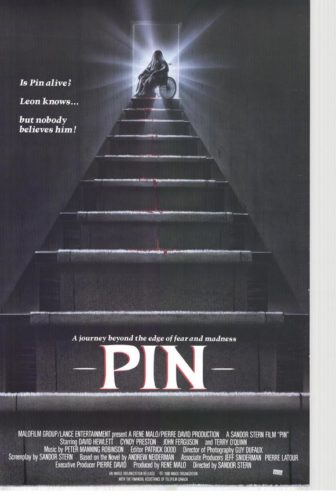 Dr. Frank Linden (Terry O’Quinn, one step away from going “Stepfather” on his family) has a life-size anatomically correct medical dummy in his office which he calls “Pin.” Via ventriloquism, Pin explains to Dr. Linden’s children Leon (David Hewlett) and Ursula (Cynthia Preston) bodily functions and how the body works in a way children can relate to, without it being awkward. Unknown to Dr. Linden, Leon, an undiagnosed schizophrenic with traits of disassociative personality disorder, begins to believe the dummy is alive. Since Leon doesn’t have any real friends (thanks in part to his mother’s obsessive compulsive disorder, who discourages Leon from playing outdoors or bringing anyone home), he believes Pin to be alive, since he’s the only thing closest to a friend. He’s further traumatized when he secretly witnesses his father’s nurse use Pin as a sex toy.

When Leon turns 18, Dr. Linden, having come back to retrieve case studies for a speech, catches him having a conversation with Pin (via ventriloquism, which Leon had learned). Realizing the extent of Leon’s psychosis, Dr. Linden takes Pin away to use as a visual aid for a speech with the intention of leaving Pin at the medical school. As Dr. and Mrs. Linden speed to the hall (Dr. Linden hating being late), they get into a car crash caused by either Dr. Linden’s recklessness or Pin (it’s left to interpretation). Leon retrieves Pin from the scene of the crash.

Leon and Ursula, though grieving, enjoy their newfound freedom until Mrs. Linden’s sister, Aunt Dorothy moves in. She encourages Ursula to take a job at the library, which Leon is against. Believing that she is influencing Ursula and after talking it over with Pin, Leon causes Aunt Dorothy to die from a heart attack by using Pin to frighten her. However, Ursula continues to work at the library, where she meets handsome jock Stan Fraker and falls in love. Meanwhile, Leon takes his fixation with Pin to pathological extremes, first by dressing him in Dr. Linden’s clothes and finally fitting him with latex skin and a wig. After this, all hell breaks loose.

Sometimes you sit through a film and aren’t sure how you feel about it and why you feel that strange way. “Pin” is such a movie. From a technical level, the film is pretty much flawless. The actors deliver great performances, the script is pretty air tight, the cinematography is beautifully restrictive. The ending is tragically brilliant. Dear viewer I did indeed shed a tear when I realized the fate/outcome of one of its lead characters. But…at the same time..is this a movie that I can recommend? Hmmm…that’s actually a very good question. I have no desire to every sit through this depressing heart wrenching movie again and I’m still not 100% sold on who this movie thinks it’s audience is. Nonetheless, if a movie effective me to the point of tears, it’s definitely doing something right. Take that however you want to.