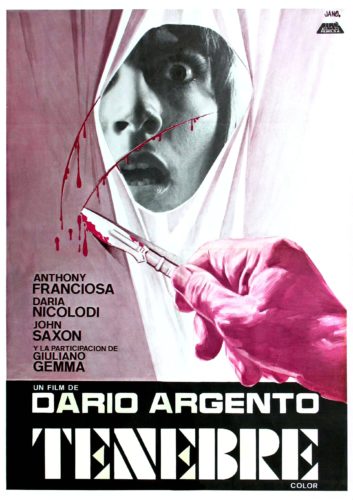 To fans of Italian horror cinema no name shines brighter then Dario Argento. Born in 1940 to a film producer and photographer, Argento has gone on to have a prolific career in the world of Italian cinema, specifically in the horror subgenre of giallo. His work has gained worldwide recognition and praise and he has come to have a devoted cult audience that love his films for their stylish appearance and the grisly and gory nature of the violence showcased in his films. Argento is best known for the films Deep Red (1975), Suspiria (1977), and Inferno (180), however to his many fans these are only three of his works in a library of films that for the most part are considered to be some of the best horror films to be made. One of those films is the subject of this review.

After the success of his foray into the supernatural with 1977â€™s Suspiria and 1980â€™s Inferno Argento decided to return to the giallo style of film which he was mostly known for, a genre he helped popularize along with other directors such as Mario Bava, Lucio Fulci, and Sergio Martino. The film which Argento would make and return to giallo with was 1982â€™s Tenebrae (A.K.A. Tenebre A.K.A. Unsane), a film which Argento claims he got the idea from after having a disturbing incident with a fan who would constantly call him and eventually stating that he wanted to kill the director. Regardless if this how the director came up with the idea for the film, Argento crafted another film which is hailed as being one of his best works. So how does the film fair? Let us journey into the darkness and find out for ourselves.

Tenebrae tells the story of Peter Neal (played by Antonio Franciosa), a mystery writer who travels to Rome to promote his new book titled Tenebrae. Upon arriving in Rome he meets up with his agent Bulmer (played by John Saxon), his friend Anne (played by Daria Nicolodi), and his assistant Gianni (played by Christian Borromeo). However he is not only greeted by his friend and co-worker but by Detective Giermani (played by Giuliano Gemma) who informs Peter that a young lady has been murdered with pages of Tenebrae stuffed in her mouth. At the same time Peter also receives a letter from the kill himself who states that Peterâ€™s works have inspired him to begin murdering people and that Peter is on his list.

With the detective doing all that he can to solve the growing number of murders, Peter joins in on the investigation to help as much as he can. Will the detective and author be able to catch the killer before Peter himself is killed? What do these visions the killer is having mean? And just who is this woman following Peter?

Released in what many fans will call Argentoâ€™s best period of filmmaking Tenebrae differently shows the director at his best in a showcase which shows off all that he is known for in the best possible ways. It houses his typical extravagant violence, beautiful cinematography, a catchy soundtrack, and many other variables such as a twisty turning story and his then lover Daria Nicolodi. But are these factors as good as his fans make them out to be?

The acting in the film is very nice which helps give the characters a personality and life which helps giving the movie some depth. Franciosa does a very good job at showing Peter as an author who is struggling with the case at hand but is still able to put up a good front, seemingly not showing off being bothered that murders are being committed in his known (except for one line in which he states that â€œI wish I would have burned that bookâ€). Nicolodi turns in a good performance as well with Anne coming off as genuinely warm and caring about Peterâ€™s situation as well as highlighting their friendship. The rest of the cast themselves do a good job too, Gemma does a great job at playing the serious but slightly fanboyish/gleeful Detective Giermani, Saxon performs great as always, and the victims range from being very nice and inviting (Gianni and Maria) to a little on the irritating side. The characters themselves develop quite well to where they become easy to like and be cared for when one of them dies. Their relationships with each other are made clear and while not all of them are fully fleshed out (Gianni Maria seem to be friends but they share only one scene together) their motives and personalities are easy to spot and thus make them important to the plotâ€¦save maybe for Maria who is just kind of there and doesnâ€™t seem to have any real relationship to the main cast.

Tenebraeâ€™s story is provides a good mystery and is easy to follow. The murderâ€™s reasoning for committing these crimes is made loud and clear; heâ€™s been inspired by Peterâ€™s works and with another motive which I wonâ€™t reveal for spoilers sake gives him another reason to do this as well. In fact the story is probably one of Argentoâ€™s most grounded and non confusing ones compared to some of his other works. However the story does become a bit off come the half way point and by the end it is unfortunately confusing. They state a reason to help relieve the audience of any possible confusion but personally I still find it to be a little out there and kind of kills the flow the film had going. But thatâ€™s only my personal gripe with the story and thus not everybody may feel as I do. Overall though, the story is definitely one of the most intriguing in the giallo subgenre and while the ending can be iffy depending on how you ask, the end product is one of Argentoâ€™s most grounded and best.

The actual technical side of the picture is very nice as well. Argento is known for his beautiful and complex cinematography and itâ€™s in full force here. One of the filmâ€™s standout moments comes in a scene in which the camera tracks up and down the outside of a house for several minutes which is one of the directorâ€™s best scenes and some of the best camerawork Iâ€™ve ever seen. Surprisingly while tenebrae means â€œdarknessâ€ or â€œshadowsâ€ in Latin/Italian the film is quite bright and thereâ€™s very little darkness to it. Even when a scene takes place at night it seems to have this illuminating look to it making it easy to see everything evolving within the scene. The music for the film which is done by long time Argento collaborators Goblin is as great as always, the Tenebrae theme itself being really catchy and is something one might hear at a disco r dance club. Like many of the films Goblin have composed music for, the soundtrack is almost like a character upon itself. And of course how could one forget the violence of the film? In typical Argento fashion the deaths are gratuitous and over the top, a spectacle for those who relish in seeing people being cut, hacked, stabbed, and just all around decimated. The filmâ€™s violence got it into a little trouble with the censors, it becoming a Video Nasty in the UK and having ten minutes of footage (including all of the violence) cut in the US release. However since the filmâ€™s initial release, Tenebrae has been released uncut in both the UK and in the US, something which helped change a few criticâ€™s opinion on the overall film itself.

Along with providing a great mystery, kills, soundtrack, and all around Argento goodness many people have found that the film includes many themes. In fact in a Fangoria interview Argento went into great depth about the themes of the film. I wonâ€™t go into deep about the themes of the film, but many people have noted the film to feature themes of aberrant sexuality, the impairment of vision, and even that of dark doubles. So for those who like to talk about themes in film and have a nice good deep conversation about it, Tenebrae gives you quite a bit to work with in that department.

At the end of the day Tenebrae is a great film which effective combines the horror, mystery, and thriller genres into one big melting pot of greatness. The story may divide some people on itâ€™s ending but the acting, cinematography, music, and violence is sure to appease fans of the Italian maestro. Is it one of Darioâ€™s greatest works? Yes. Is his best? Thatâ€™s debatable. But in the end Tenebrae is a film that I highly recommend to fans of Argento, giallo films, Italian films, and horror in general.

Morgan Moore is an online writer and aspiring filmmaker. Heâ€™s the creator and main contributor to the blog Unbalance Ramblings. He considers John Carpenterâ€™s Halloween to be his favorite horror film of all time.