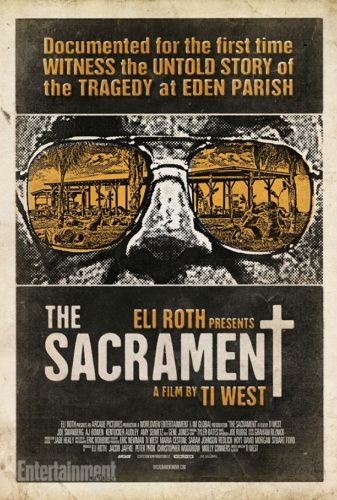 When The House of the Devil was released in 2009, Ti West instantly became the go-to guy for quality, independent horror. The film was well shot, brilliantly executed, and featured a powerful performance in the form of Jocelin Donahue. The film was nothing less than the a revelation. Many horror reviewers, myself included, heralded him as the next big superstar of the genre. In the five years since that film’s release, West’s projects have ranged from quality (I maintain my strong support for the underrated Cabin Fever 2, even if West himself hates it) to the entertaining-yet-flawed (The Innkeepers) to the flat out terrible (V/H/S, I’m looking at you here). Now West is back with a new project, The Sacrament. Does it live up to the lofty ambitious of Devil or does it fall flat on its face like many of the stories in V/H/S? Let’s join the cult and find out.

As The Sacrament begins, we meet Patrick (Kentucker Audley), a young fashion photographer who is preparing a trip to meet his sister Caroline (Amy Seimetz). Caroline has left a drug rehabilitation program to stay at Eden Parish, a commune away from the rest of the world. Joined by his friends Sam (AJ Bowen) and Jake (Joe Swanberg), journalists who hope to get a story out of the trip, the three of them head off to visit Caroline. The details are vague and what they are about to discover is something that will change their lives forever. To go any further into the details wouldn’t wreck the mystery of this story, and it is one that you want to go in with an open mind. When it is all said and done, don’t be surprised if you are left with more questions than answers.

The Sacrament is the rare beast when it comes to indie filmmaking. The sort of raw approach to otherwise familiar territory is welcome here. After months of bitching about the found footage movement, here is a movie that not only uses found footage to tell its story but also uses it to enhance some very grim visuals. When this film was over, I found myself shaking with nervousness and anxiety. This film stuck with me and there are many individual scenes that I won’t soon forget. Without giving too much away, there is a scene with Patrick and Caroline in the final act that is so heartbreakingly real, that I couldn’t bare to look at the screen. West holds it all in one continuous take until the audience simply cannot stand it anymore. That, in essence, describes the entire film.