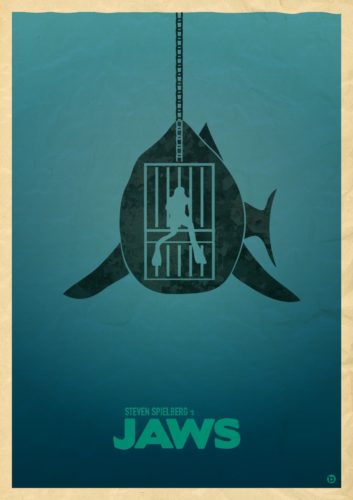 Well I have finally seen Jaws for the first time (“J” of #AtoZHorror in August) and to be honest, my expectations were pretty high for this one! Did it live up? Not quite, but I still thought this is a masterfully made thriller that manages to slowly but surely build up the suspense and tension. What mostly worked for me was the fine direction by the legend himself Steven Spielberg, the actors were really strong in character (especially Robert Shaw and Richard Dreyfuss), the score of Jaws is really memorable and is very suspenseful, I liked the cinematography and art direction. I also thought the kills and especially the shark attacks were really well done, they felt like a grand climax and you knew that the fear was there. There were also a fair amount of blood and scares which kept me as a horror fan really interested.

There were also some things that I felt didn’t work. In some scenes I had the feeling that this movie dragged on for too long and focused a lot on the characters, which wasn’t necessary. Scenes like these really bored me but part of me also got upset by this cause the movie was basically going to a way different direction than I wanted to. I feel like this movie would’ve been better off if it’d be 20 minutes shorter. Overall Jaws is a great thriller that I would recommend to anyone, its nowhere near perfect but I still had a good time watching it. There was a surprise amount of depth and drama in it that will always make it stick out above future entries in the sub genre.