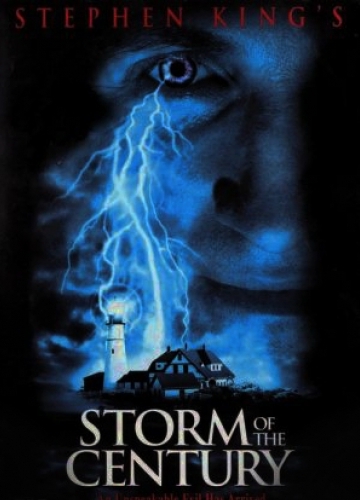 Stephen King has definitely had his share of hits and misses when it comes to film adaptations of his work. In the 90’s during King’s peak, you could expect a brand new made-for-tv miniseries based on one of his books at least once a year. Today our Twitter reviewer Tim Schilling is back with another tweet by tweet review of “Storm of the Century.” The miniseries received mixed reviews from critics but was an audience favorite. The real question…how well does it hold up 15 years later?

Thoughts before the film:
When I saw this movie as a kid, I wanted to hide in my bedroom for the rest of my life.

DISC ONE
0:02 Just remembered I bought that screenplay book thing they released for this movie, I could totally follow along.
0:07 Born in sin, come on in!
0:12 Haha what! I didn’t know spencer Breslin (or whatever it is) is in this movie.
0:20 I’ve always wanted to live on a little island like this, not many people, one small road of where everything is.
0:30 They need to name this killer guy already so you can understand who I’m talking about and not sound stupid.
0:33 His name’s Andre… Alright.
0:40 This movie reminds me a lot of 30 Days of Night. Anyone else ever got that feeling?
0:48 This movie makes so much more sense now that im older….
0:50 So what Andre is saying, is that this island is full of sluts and potheads!
1:00 I love the exterior shots in this movie, the snow is so menacing!
1:07 Give me what I want, and I’ll go away.
1:18 I hate when Andre’s eyes go all black, it’s so creepy.
1:39 Tell us what you want already so you can go away!
1:43 I think the reason my parents let me watch this when I was younger is cause I wouldn’t understand any of it.
1:49 Oh crap, when Andre was talking to this girl I didnt know it was about an abortion, I thought she got a boob job..
1:58 No old lady you didn’t hear anything, you probably need to go to Walgreens and get new hearing aid batteries.
2:05 Is there a reason why she’s singing the little teapot song or are they doing it just to try to be creepy?
2:11 Oh I get it, the little teapot song is the song of… DEATH! 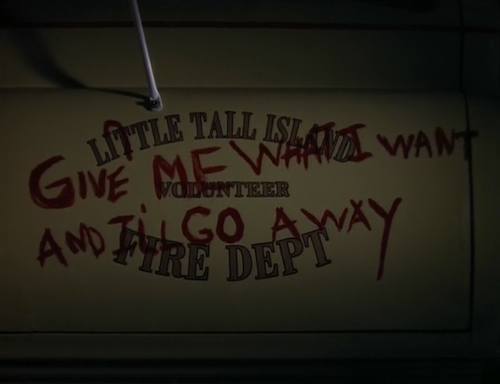 DISC TWO
0:02 I know this is a miniseries and all, but a lot of this stuff is very repetitive.
0:21 Wait, so people actually watch those tv channels where people just preach to you?
0:35 The scariest part of this movie is when Andre is calling Ralphie or whatever over to the closet.
0:36 I guess it wasn’t as scary as I remember…. I was a wimp when I was younger apparently.
0:40 Okay. We get it. Give him what he wants and he’ll go away.
0:46 There’s something about you that pisses me off!
0:57 Pippa’s got some sass!
1:07 I’d never wanna live on an island with these people, they’re all so messed up!
1:13 This demon guy is the worst, telling everyones’ deepest secret in front of the whole town.
1:16 I have a feeling Stephen King has read Dante’s Inferno quite a few times.
1:30 I lied about wanting to live on a small island like this, these people are fucked up.
1:52 I don’t blame mike for leaving Molly and the island, I wouldn’t stay there with those messed up people either.
2:01 Oh man that ending…

Final Verdict:
#StormOfTheCentury is still one of my favorite Stephen King films. I LOVE the story, even though it got repetitive after a while. The last half hour of it is the best, it’s so sad, creepy, and satisfying at the same time.