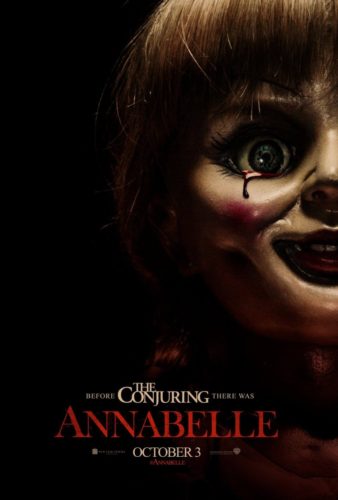 Annabelle is a spin-off/prequel to the hit 2013 horror film The Conjuring. It tells the story of the creepy doll that eventually fell into the hands of Ed and Lorraine Warren.

The film begins with the scene in The Conjuring in which a young woman and her friends came across the doll and have it examined by the Warrens. It then goes back in time to Mia (Annabelle Wallis) and her husband John (Ward Horton), who are expecting their first child. John surprises Mia with an antique doll that she had her eye on. All seems well until a brutal murder happens to the next door neighbors, and Mia is then attacked by one of the intruders. The female intruder then has her blood drip into the doll’s eye. Soon after, sinister things begin to happen, and Mia is convinced that they need to move out of the house. However, despite their move the presence follows them, and the events continue. The couple then enlists the help of Father Perez (Tony Amendola) and one of their neighbors Evelyn (Alfre Woodward) to help solve what is going on. Is the doll suddenly coming to life, or is there something far more darker happening that puts not only the lives of the couple in danger, as well as their child.

It wasn’t too long after the success of The Conjuring that word of a spin-off would be happening. And it certainly didn’t take them long to film and release, and definitely shows here. Though the film does feature some fine performances by its cast and we definitely develop an attachment to these characters. It also features some fairly well-done chiller moments, particularly the invasion scene in the beginning and a certain moment involving the storage unit in the couple’s apartment. However, it does feature some major predictable and cheap jump scares that eventually become repetitive. Not only this but the plot is very much lackluster and provides nothing new as a film overall.

While Annabelle does feature fine performances, likable characters, and a couple of chilling scenes, it doesn’t make up for the fact that there is nothing new to it. It is purely an origin film that is completely unnecessary, and quite frankly makes the Annabelle does less freakier than it was in The Conjuring. It was clearly made just to bank of The Conjuring’s success, and the work involved definitely shows this.