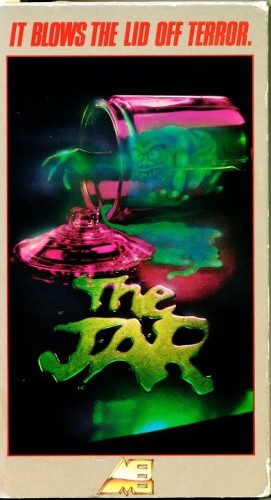 Paul gets into a car accident with an old man who is out of his mind and carries around a large jar in a brown paper bag. Paul (who sounds just like Radish from Final Exam) takes this strange man to his apartment to get him cleaned up and send him on his way but the man mysteriously vanishes, leaving the jar behind. Overcome by curiosity, Paul opens the jar and takes a peek inside. Inside the jar he sees a fetus-like creature staring back at him! From that moment on Paul is overcome by horrifying hallucinations. Days go by like minutes and he can no longer tell what is reality and what is a dream. He tries to get rid of the jar but it just keeps coming back to haunt him! Can Paulâ€™s beautiful female neighbor help him through his paranoia? Or, like the old man who left him the jar, will Paul lose his mindâ€¦ forever?

Everyone who knows me knows that I love bad horror movies, and I can endure the worst of the worst. But I have to admit, it was quite a stretch for me to get any enjoyment out of this one. 75% of the movie consists of Paulâ€™s hallucinations which are nothing but random scenes with a lack of narrative. Itâ€™s like watching the video from The Ring (2004) but instead itâ€™s an hour long and itâ€™s not scary. Paul witnesses things like blood rising from his bathtub drain, and then he his transported to a childrenâ€™s park where a little girl releases a balloon into the air and then they hold hands. Stuff like that. So artistic, isnâ€™t it? There were a few cool camera and lighting effects but the filmmakers were a little too ambitious, and in the end it just came off as way too artsy-fartsy. With the 20 minutes of actual storyline and dialogue with other characters there were some laughs to be had with the awful acting and a stupid script, but unfortunately those entertaining scenes were too few and far between.

[[SPOILER ALERT]] In the end, Paul kills his pretty neighbor because he imagines that she is the strange old man who left him the jar. He then passes on his demonic possession to his concerned boss who stops by his apartment. The End. I saw that ending from a mile away, and Iâ€™m sure all of you would have too. I for one got a LITTLE enjoyment out of this, but itâ€™s really hard to recommend this one to anyone but fans of really, really, really bad trash film. This isnâ€™t The Last Slumber Party by a long shot. So without a linear storyline or an entertainingly bad cast, there just wasnâ€™t enough fun to be had. But if your curiosity takes over and you decide to take a peek inside The Jar, consider yourself forewarned!