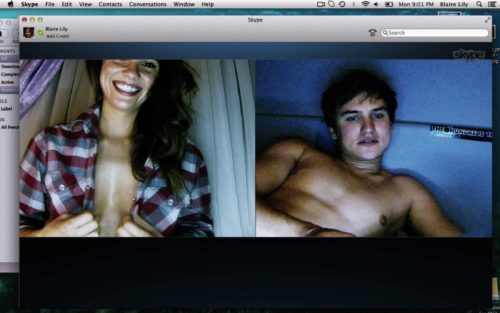 When the trailer for the film was released, it definitely caught my attention. It looked like a fun teen horror film. As time progressed, I learned the film was rated R, which heightened my excitement level. But then, reviews rolled in and they were extremely positive. Not that I listen to critic reviews in the first place, but it was still pleasantly surprising to see a horror movie receive good reviews that wasnâ€™t supernatural or indie. However, upon seeing the film, I found myself massively disappointed and furious. The concept I admit was very engaging, bringing terror into the cyber world is relatively new for the horror/found footage genre. Despite this, it essentially did NOTHING with the story, or at least nothing worthwhile. To start of with, the terror is very weak. Not once did I feel remotely close to scared or creeped out. Any jump scares there were, were not effective at all, with what little jump scares they had. The whole time during the terror it is nothing but the friends crying, shouting, or yelling at each other or their unknown assailant. None of the situations the characters were in besides the kills werenâ€™t scary.

This leads to the characters themselves. Not ONE of these characters were likable. You literally wanted ALL of them die. They were annoying, stupid, and horrible people. During the â€œterrorâ€ scenes, the reactions of the characters were unbearable that you just wanted someone to die so theyâ€™d shut up. Along with this, is the horrible acting by the characters. You can tell the actors were trying way to hard to be scared and vulnerable. If the characters or at least some of them had been remotely likable, it might have been more tolerable and more chilling. The film also features many moments where it tried to be funny, but it absolutely ruined the flow of the film, the charactersâ€™ stupidity added to this. However, I will give it credit to say that there were moments during the game of â€œNever Have I Everâ€ that were engaging, but failed to completely capture because they could have amped it up. Another plus I will give it are the great kills. We only get just some glimpses of them, but itâ€™s effecting enough. On another note, I fail to see how this movie garnered an R rating, the kills, while bloody, could easily have been PG-13, and the use of the f-bomb I barely even noticed.

Overall, Unfriended is one movie to completely avoid. But if you must see it for some reason, wait until Redbox. The film is horribly written in every respect, and terribly acted. While it had great kills, itâ€™s not enough to make up for this mess of a film. Check out the movie The Den for a similar story, but MUCH better as a horror film.