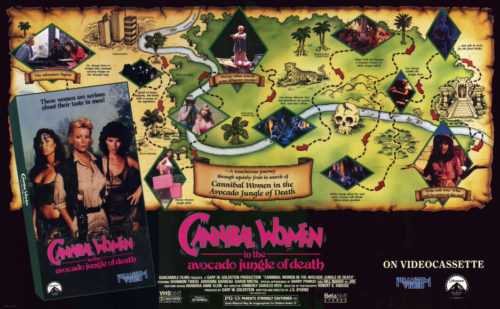 In Jungle of Death, the government takes matters into their own hands and hires a feminist professor (played by Shannon Tweed in a comedic performance that is both sincere and sexy) at the local university to track down the piranha women living in the uncharted Avocado Jungle. The piranha women have already kidnapped one professor (the lovely Adrienne Barbeau who makes every movie she appears in better). She takes along a young, sweet but dumb as dirt college student named Bunny and hires a guide at the edge of the jungle (a very sarcastic Bill Mahar who isn’t nearly as annoying as you’d think he’d be) to find the piranha women.

What follows is a fairly clever and very funny take on the struggle of men vs. women. Not every joke work and the film does seem to take its sweet time finding a point but it is very funny and the go-for-broke cast sells every minute of it. Highly recommended!