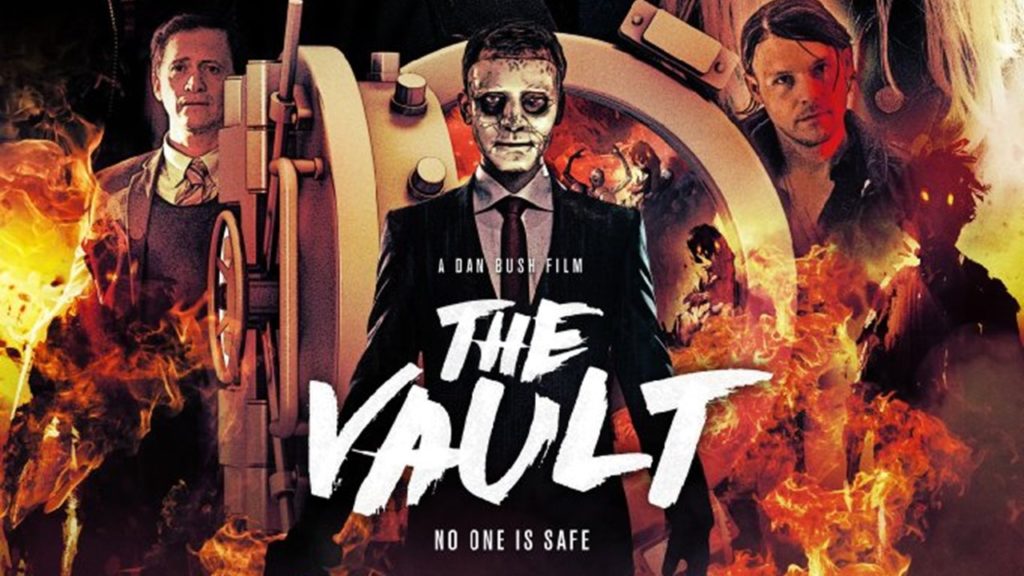 Two estranged sisters come together to pull off a bank robbery to help their brother who has run into trouble financially and owes money to some bad guys. The robbery seems to go smoothly until they find that they have come up short. When the assistant manager of the bank reveals there is a hidden vault downstairs where the old bank is located, the group heads down there. Unbeknownst to them, the vault is home to something dark and evil from the bankâ€™s past.

The Vault is honestly one of the more entertaining horror films Iâ€™ve seen this year. This comes in the way it chooses to blend a few different genres in one. It goes from a heist film and then turns into a hellish and supernatural film. It certainly wasnâ€™t the film I was expecting, and I mean this in the best way. I was never bored at all during this film, waiting to see how everything would unfold. The heist aspect had good pacing and intensity, but then when the horror comes in it amplifies that. It wonâ€™t scare anyone, but it does offer some chilling moments when the creatures of the vault are released. The scenes with these creatures are amongst the most creepy, and this can be thanked to the actors portraying them in the creepy ways they chose to move and attack the characters. I was disappointed however with how little action the final act had, I was expecting a much more intense showdown/encounter with our leads and the creatures. Instead it just seems to feel rushed to wrap things up. The final act still works, but considering the short length of the film, it could have done with an extra ten minutes or so with all of our characters finally down in the vault trying to escape. Iâ€™d say the worst thing about the film though is the final shot of the film that is not only groan-worthy but didnâ€™t make any sense at all. Had it ended before that scene with the big reveal of the film (one I didnâ€™t exactly see coming but I feel many will) it would have been a great way to end it.

The characters at hand arenâ€™t exactly the most likable, most especially Francesca Eastwoodâ€™s character who just comes off as a cold bitch for most of it, but Eastwood does play the role extremely well despite that. Taryn Manning is the other sister who is ex-military, and while she is more likable than Eastwoodâ€™s character, she still isnâ€™t someone you particularly care for (unless youâ€™re like me and because you like the actress you want her to survive). Manning more or less plays the loud, tough ass bitch she plays in most films. Of the siblings, itâ€™s the brother in needs who is the most likable, but also the most underdeveloped. Scott Haze does a great job in this role in what he does get to show. We see how desperate he is to get out of his financial situation but he knows how wrong this whole robbery situation is and doesnâ€™t want harm to come to anyone, and Haze shows this really well. It is another weak aspect that the siblingsâ€™ relationship isnâ€™t exactly developed really well, nor do they really spend much time together, apart from the two sisters who just yell at each other the whole time, and the brother is basically the glue between them. On top of that we really donâ€™t know much about the brotherâ€™s backstory and the money he owes, and not too terribly much about the dynamic between the siblings. James Franco unfortunately doesnâ€™t get much to do as far as acting, mostly just sit on the ground tied up and spout off his lines with some look of concern. His character is integral to the story, but it sucks for a big name he doesnâ€™t get much to do.