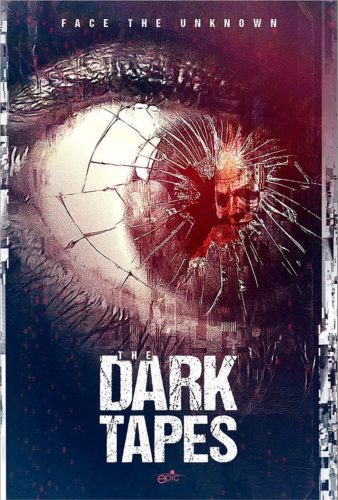 A young couple discovers a random video tape that leads them to an abandoned room where it seems an experiment had been taken place. The tape is played back to show two young students and their professor trying to make contact with spirits of a parallel world. All the while, the clips are inter-spliced with other bizarre, supernatural footage.

One of the biggest problems with The Dark Tapes is that there is just point to it. We have our wrap-around story, which is the two students and their teacher. There is a story about a couple who enlist the help of ghost hunters to find out whatâ€™s going on in their home, a tale about a sinister web show involving two young women, and one about a girl experiencing visits from otherworldly beings after being drugged at a party. While each of these stories do consist of the paranormal, there is just no point to any of them being in the same movie. There are no connections at all. Unlike V/H/S for example, they donâ€™t have anything in common, but they are at least found with each other. The tapes involved with the wrap around donâ€™t have that indication. Whatâ€™s even more tragic is that the wrap-around story was by far the most interesting, but itâ€™s completely rushed with no real development and can often be hard to follow due to being rushed. And the supernatural entities that we are shown look nice with its practical costuming and effects, but once they start talking, itâ€™s super ridiculous. The other tapes are severely boring and donâ€™t offer anything chilling, disturbing, or entertaining. I will give credit though to the ending of the Paranormal Activity-ish story with the ghost hunters in that the twist was decent. Though it should have ended at that reveal immediately. The web show tape featured some nice gore, but thatâ€™s as far as the positives go for that. In terms of performances, very weak all across the board, unfortunately.

Had The Dark Tapes been primarily about the wrap-around story and into a choppy anthology story with boring and uninteresting segments, this actually could have been a decent movie, even with the poor acting. And despite itâ€™s small budget it does really well with the practical effects without looking cheesy and hokey. Instead we get one of the worst entries in the found footage subgenre that Iâ€™ve personally seen.