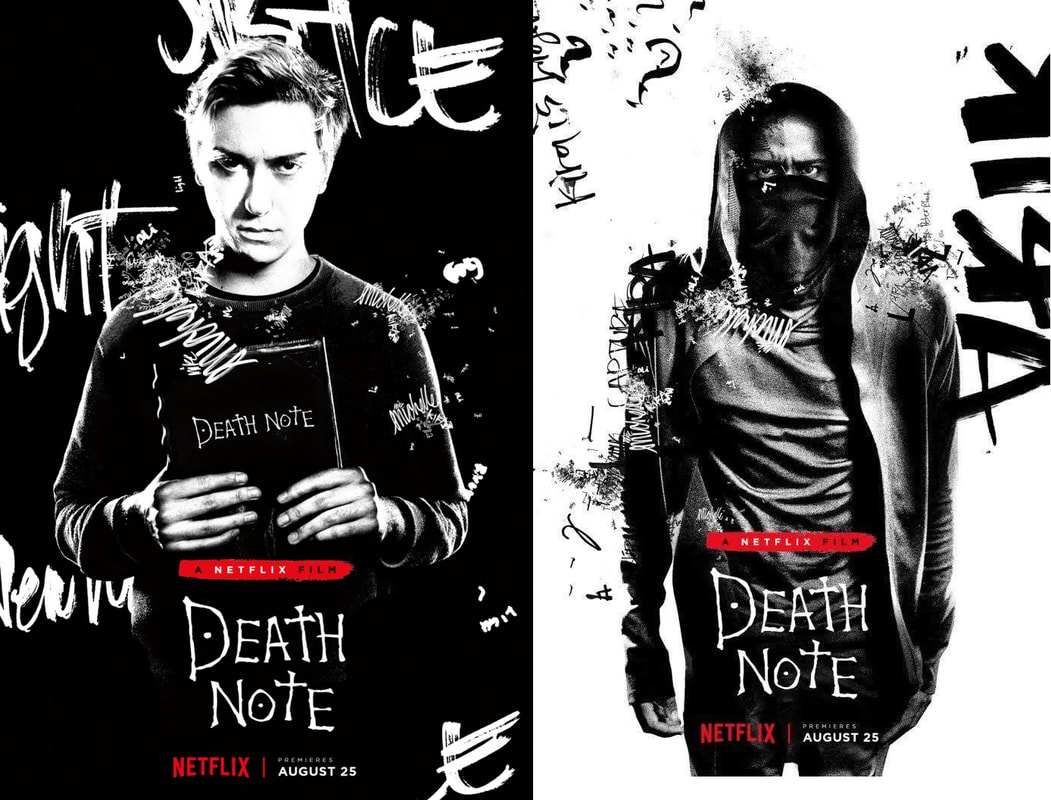 When a young teen discovers a notebook called the Death Note, he learns from an evil spirit that it can cause the death on whomever the owner writes in it. The writer has to be very specific though. They must include the full name, and how they want them to die. The more detailed, the better. If they donâ€™t give a cause of death, the spirit chooses. He initially takes the opportunity to use in his personal life. But he then teams up with a classmate and they decide to use this power for good, ridding the world of criminals. But a cop take on the case to find out the cause, believing these mysterious deaths are murderous. The two friends then grapple between right, wrong, and obsession as the cop is on their trail.

Prior to this Netflix film, Iâ€™d never actually watched the animated series. Iâ€™ve definitely heard of it, and it caught my interest. The trailer for the movie caught my attention with not only the interesting story, but also the way the film looked overall, grim and haunting. The does deliver the interesting concept and brings forth an interesting story, but ultimately it did come out to be average. The idea here is great, but it just seemed to keep rehashing much of the stuff it already covered, and along the way it becomes muddled with confusing plot points that makes everything established already seem completely written off. This is what I found the most frustrating. Theyâ€™ve established the rules of the Death Note, but then they add all of these conveniences later on to satisfy where they want the plot to go. I was also disappointed that it didnâ€™t go further into a darker and more horror-like territory than they did. The horror aspect only occurs within the first 45 minutes or so. From there it goes into this vigilante/fantasy/suspense film with random teen drama thrown in. This is where the film loses its momentum. Others may dig this aspect of the teens taking on this power, but what I wanted was to see them gradually growing dark with each person they choose to kill, maybe even some innocents. The vigilante aspect just really didnâ€™t do much for me. The cop tracing them would have made more sense if random people began to die instead of criminals no one cares about.

On a technical aspect, the look of the film delivered in its dark and grim feel. This was the only horror aspect that seemed to stay present. The soundtrack was great as well, even if it didnâ€™t seem to fit well with the scenes at times, or it seemed too on the nose. Nat Wolff is pretty great as the lead character, Light. He plays the character with realism in the beginning, and he does a good job of transitioning into his obsession with power, and then showing the balance between this obsession and wanting to stop. Willem Dafoe plays the evil spirit Ryuk brilliantly, but we all know Dafoe nails the villainous roles, so that was a given. Lakeith Stanfield and Margaret Qualley are the two weak links in the film. Stanfield as the cop on the two teensâ€™ trail turns in a performance that makes it looks he is either trying too hard or not trying hard enough. Qualley plays Lightâ€™s partner and love interest. Of any part in the film this is the one should could have had the most fun with as a manipulative and the most unhinged of them all. Instead she just comes off too wooden and casual for a role that required so much.

Iâ€™m sure there are people who donâ€™t mind Death Note for what it is, and what it is, is fine, but it suffers from a loss of momentum part way through, a poorly written last half, and not as much horror or darkness as it could have gotten. Adam Wingard does great with the direction, and the look of the film is great, along with Wolff and Dafoe. If anything this film was just a missed opportunity.