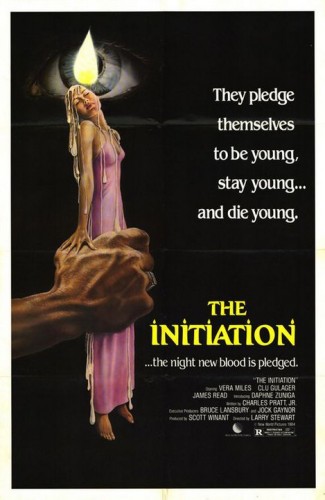 Here we go again with yet another entry into this slasher film this we have The Initiation from 1984. This movie came at a time when the slasher flick was hitting a bit of a decline. One could say that the decline started earlier and I would sort of agree. 1980 and 1981 saw a slew of these movies released and by 1982 things were getting a bit stale even if still fairly enjoyable. By this time all creativity was pretty much gone since it was kinda late into the game and you just make the best film you can and hope for the best. The Initiation doesnâ€™t add anything new to this type of film. But it does try and be different than the basic stalk and slash film.

The Initiation is a semi-forgotten movie and if not for a 2002 DVD release by Anchor Bay then a re-issue as part of a double feature a few years later and a September 2011 release, which seemed to go totally unnoticed this film would be long forgotten and even with the DVD releases of the years not many people seem to remember this film, which is quite surprising seeing as the movie has an excellent cast; we have Clu Gulager (Return of the Living Dead), Vera Miles (Psycho) James Read (Charmed) Hunter Tylo (The Bold and the Beautiful) going under the name Deborah Morehart and of course the star the very sexy Daphne Zuniga. I think part of the reason The Initiation isnâ€™t all that remembered is it came out the same year as A Nightmare on Elm Street and itâ€™s nowhere near as creative or scary, also that year came Friday the 13th: The Final Chapter and it isnâ€™t as gruesome or crowd pleasing and finally Silent Night, Deadly Night and it failed to stir up the controversy of that movie. 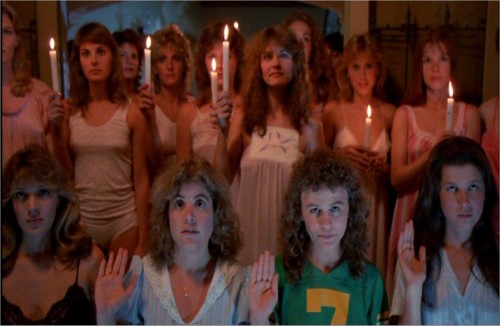 The script by Charles Pratt tries to be different than the typical stalk and slash movie of the 80s and adds a little bit of psychological horror with slasher movie elements mixed in and while this was an interesting idea and I give credit to Pratt for trying to add more depth to the movie, but it just didnâ€™t fully work. Kelly Fairchild (Zuniga) is a sorority pledge who is being plagued by horrible nightmares since childhood; the dream involves Kelly walking in on her parents having sex she attacks her father and then a man enters the room and a fight breaks out and the stranger catches fire. Kelly is told she suffered amnesia as a child and itâ€™s only a dream, but Professor Peter Adams (Read) is determined to find out the truth on if itâ€™s really a dream or a dark buried secret; on pledge night Kelly and a few of her friends enter the mall her father owns, but somebody has followed them inside and dispatches everybody on their path to Kelly.

The reoccurring nightmare Kelly is having doesnâ€™t really serve much of a purpose besides to set up the twist at the end and the first half of the movie doesnâ€™t really fit in either with the 2nd half as the movie becomes the standard slasher flick and quite honestly you could probably miss the first half and not lose much on the plot or characters. When all is said and done I suppose the first half is just sort of pointless even if the idea was interesting. Pratt does try and add some depth to not only the plot, but the characters as well, but when all is said and done with the exception of Kelly all the characters are rather forgettable and clichÃ©d. Prattâ€™s script might be a little deeper and complex than most of this type of film, but itâ€™s still brought down by the typical clichÃ©s, but overall the script isnâ€™t bad, but just sort of pointless. 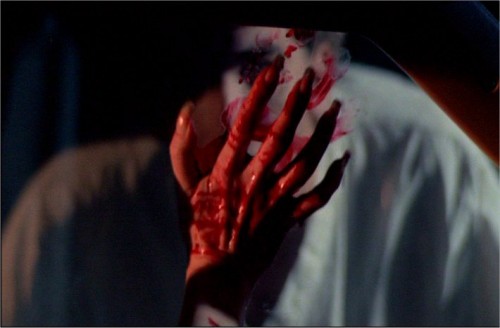 Director Larry Stewart makes his feature film debut as prior to this film and after it as well all his credits are TV productions. From a technical standpoint, The Initiation is fairly well-made this isnâ€™t exactly John Carpenterâ€™s Halloween in terms of production, but Stewart does deliver a decently made flick with decent production values. The pacing of the film can be a little sluggish and while the first half of the film can be a tad bit slow itâ€™s never really boring either. However after a while it does start to repeat itself in many areas. Once the characters enter the Fairchild Mall the pacing does get a bit better, but itâ€™s still a bit drawn out at times and it does feel a little overly long at 96-minutes. The suspense and tension are fairly light as the death scenes are all pretty much the same and it really offers nothing that we havenâ€™t seen in previous slasher flicks.

I think what hurts the movie is this late into the game the element of surprise is gone and unless youâ€™ve never seen a slasher movie before there shouldn’t be any surprises in the fate of the characters. Compared to other slasher flicks The Initiation does lack the excitement these films are often known for and everything is pretty much by the books. Stewart also never really takes advantage of his settings either. When all is said and done Larry Stewart delivers a fairly entertaining flick that while gets the job done, but again lacks the excitement slasher flicks often have. 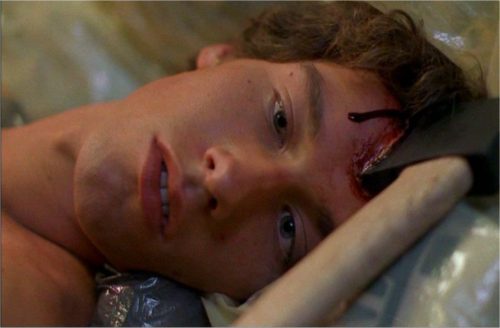 Overall despite the flaws I mostly enjoyed The Initiation and the only things that really bog the movie down is some sluggish pacing and the death scenes could have used a little bit more gore as well. While this film wonâ€™t go down as one of the elite slasher flicks of the 80s I actually enjoy it more than such films as Prom Night and Sleepaway Camp. The twist at the end did sort of catch me off guard and while I suppose it might obvious to some I actually didnâ€™t pick up on it though looking back at the film it isnâ€™t too difficult to possibly figure out and while it is a bit silly it does sort of work as well for reasons I canâ€™t fully get into since I donâ€™t wanna spoil the movie. Overall The Initiation is a fun if not flawed movie and while you can do a lot better than this you can also do a lot worse.

The credits state Introducing Daphne Zuniga, but thatâ€™s actually a mistake since her first credit was 2-years prior in The Dorm That Dripped Blood and while her role was small she was credited. The Initiation was produced by Bruce Lansbury the brother of Angela Lansbury and he also produced her hit series Murder, She Wrote.