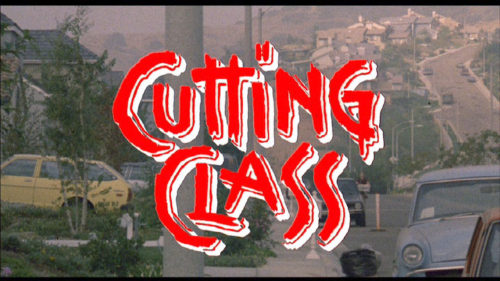 William Carson, a wealthy district attorney decides to take a hunting trip, leaving his lovely daughter Paula (Jill Schoelen ) alone at home. Before going he leaves her with some rules, such as no boys in the house, no partying, and no cutting class. Well, while out hunting, Mr. Carson takes an arrow to the chest and is left for dead by an unknown assailant. Before you know it, teachers and students from Paula’s school start turning up missing and some, dead. Could it be the redneck pot smoking custodian, the perverted principal (the excellent Roddy McDowell) who loves catching ass shots, Paula’s no brain jock boyfriend, Dwight (Brad Pitt), or an old friend of Dwight’s who just recently got out of the hospital for being, *dramatic pause* fucked in the head? This sometimes funny on purpose, sometimes unintentional 80’s horror romp actually had me guessing till the end!

It is an assumption of mine that director Rospo Pallenberg’s main goal was showing many an angle, many a long pause of the lead heroines butt while filming Cutting Class. Not to mention the teasing side nude shots that I have a love/hate relationship with. And what better an actress to perform these tasks than Jill Schoelen? Not the greatest actress, not the worst, but pretty nice to look at. The director pretty much flaunts her here. You could easily play a drinking game to Cutting Class where everyone has to take a shot when Jill Schoelen bends over, and you would be wasted when this flick is through. There’s even one scene where her art teacher has the whole class drawing her while she’s modeling in a body suit, either bent over or standing on her tippy toes trying to grab an apple from a significantly tall male. Did they really have a class like this in high school? If so, how did I miss it? I won’t even go into the gymnasium scenes, but let’s just say they are amazing. 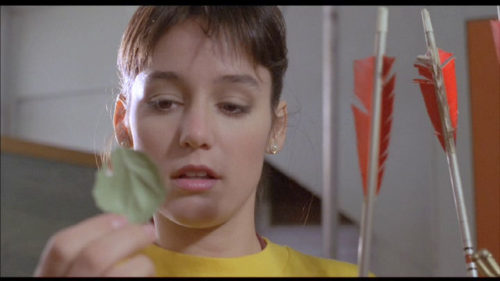 The movie is filled to the brim with dialog so bad that it’s epic –i.e. one scene where the custodian tells Paula and Dwight that he’s “the custodian of their fucking destiny”! This moment alone demands multiple playback. The acting is downright awful. Brad Pitt must be proud. Sadly, Roddy McDowall only has a few scenes in the flick and the most of them are him drooling at Schoelen, like every other male character in the movie.

Not a huge gore level, but some interesting kill scenes. My favorite is the gym teacher getting impaled by a flag while doing body flops on the school trampoline. The aftermath of a cheerleader (who removes her panties before the basketball game) and her boyfriend being murdered under the grandstand is pretty messy. A neat little off screen death with a teacher being melted in a kiln takes place, also.

It’s said that Brad Pitt and Jill Schoelen were engaged after starring in the movie together, but split up shortly afterward. Donovan Leitch from The Blob ’88 also stars.