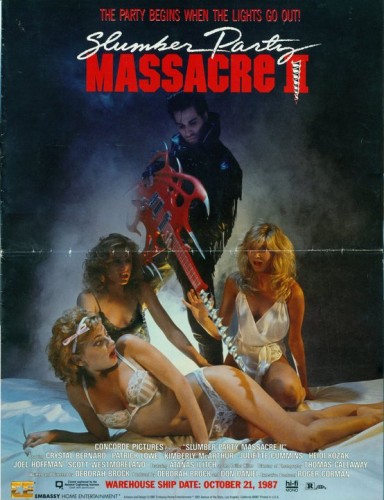 Was there ever a more fun time for the horror genre than the 80s? Only in the 80s could a movie like Slumber Party Massacre II to be made and work well with the audience. Even though the 70s is my favorite time for the horror genre (and film in general) the 80s easily has to rate as the most fun the genre has ever had and most likely ever will. There are still some filmmakers that attempt this kind of off the wall over the top movie and almost all the time it doesn’t work and even when it does work it feels forced. Released in 1987 Slumber Party Massacre II picks up from the original and is set 5-years later (and the movie came out 5-years after the original).

Courtney (Bernard) who survived the attack of the Driller Killer in the original is now 17-years old and has her own all-girl rock band and her sister Valerie (Eilbacher) is now in an insane asylum. Rather than go visit her sister, Courtney decides to spend her birthday weekend with her friends for a fun slumber party weekend, but the fun soon turns deadly as the Driller Killer (Ilitch) shows up and spoils all the fun.

The screenplay by Deborah Brock is a lot of fun mixing in slasher elements and supernatural elements and some of the influence clearly comes from A Nightmare on Elm Street. I don’t think anyone goes into slasher flicks for the deep characters, but I do expect them to be at least fun. The characters here are mostly inter-changeable and while they may not entirely have their own identities all the characters are however a lot of fun and likeable well at least the women.

Brock never really has any intentions of writing a serious screenplay and just has fun with the genre conventions. The script is quite over the top and silly, but again it’s quite a bit of fun. Like I said even though the movie does continue from the original it really is quite different in style and while Brock’s script may not be an award winner it really is a blast with fun and entertaining characters.

As director Deborah Brock delivers a fun and well-paced movie; the movie doesn’t have a whole lot of action until the final act, but each scene has a high fun level. Like her screenplay, Brock never really attempts anything too serious and the movie has a campy feel throughout. There does however seem to be a few things implied such as Courtney’s sexual hang-ups, which is a nice touch to an otherwise silly and over the top movie. Like I stated earlier in my review this is the kind of movie that could only be made in the 80s and Deborah Brock delivers one of the most fun horror flicks of the 80s.

Slumber Party Massacre II does get some mixed reviews and I can more than understand the poor reviews; the killer singing and dancing, Courtney getting attacked by a frozen chicken and those are just a couple of the silly scenes so I can totally get the negative reaction this movie can sometimes get, but if you take the movie for what it’s worth and sit back and just enjoy the camp value that Brock was going for the movie is a lot of fun. The camp value was intentional and Brock just wanted to make a movie that was fun and in my opinion she very much succeeds.

The cast is actually pretty good with some notable faces; the biggest would be Crystal Bernard who is probably best known for the TV show Wings also in the cast is Heidi Kozak who the very next year would appear in Friday the 13th Part VII: The New Blood and keeping in tune with Friday the 13th Juliette Cummins starred in the 5th installment A New Beginning and Psycho III, Kimberly McArthur is a former Playboy Playmate and last, but not least is Jennifer Rhodes probably best known for her role on Charmed. The actors all deliver really fun and energetic performances and while none may be Oscar worthy again all the actors really deliver fun performances and really help elevate the movie.

Atanas Ilitch as the Driller Killer is a total blast! While characters such as Jason, Freddy and Michael are the most popular choices for favorite villain I honestly would pick The Driller Killer over them. Ilitch is a blast to watch with his drill on his guitar and it’s hysterical when he starts to sing and dance before going back on the attack.

Overall Slumber Party Massacre II is one of my favorite horror flicks of the 80s and easily one of my favorite guilty pleasure movies. Despite being a continuation this movie very much strays from the original and is just a total blast to watch! Each scene is just as much fun as the last. There are also some nice homage’s in the movie with one character named Kruger (spelled Kreuger in the credits) and another character named Voorhees (spelled Voorhies in the credits). Also Heidi Kozak’s character is named Sally Burns, which is a nod to The Texas Chainsaw Massacre with Sally being the name of the lead character and the actress was Marilyn Burns.