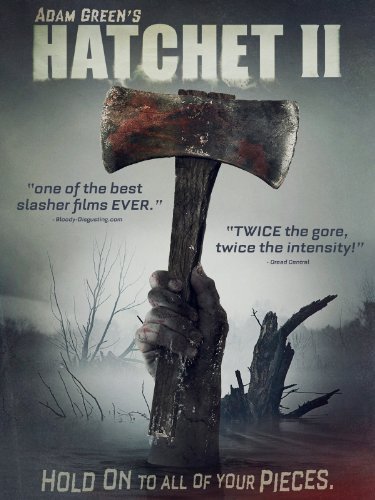 Picking up immediately after the first film, Marybeth escapes the carnage of Victor Crowley, the ghost of a deformed man that is stuck re-living the night of his death. After learning the truth of her family’s past, Marybeth and Reverend Zombie assemble a group of hunters and return to the Louisiana swamps to find the bodies of her Father and Brother, and to lay the legend of the Bayou Butcher to rest.

October 1st, 2010, midnight: I was as giddy as a kid on Christmas. Why? Because I was fortunate enough to see Adam Green’s “Hatchet II” at the cinema in unrated form. This was a big deal. It was the first horror film to get an unrated theatrical release since George Romero’s Dawn of the Dead back in 1979! Sadly, it only stayed in theaters for roughly two days because our rating system in the US sucks, to put it nicely. After fighting and fighting with the MPAA about his film receiving an NC-17 rating, Green decided to take it straight to AMC theaters; they loved it and agreed to release it in its entire gory glory. This created a huge stir, and it was pulled out before it even had a chance.

Thankfully, it can be seen on BluRay and DVD the way it was intended to be seen, but it is still getting the shaft. Redbox is only carrying an R-Rated version, which is missing two full minutes of greatness. In terms of a movie, 2 minutes is a lot of time. Some movies with a more serious tone can involve a brutal rape scene or the murder of a child and go on to win an Oscar, but a movie like “Hatchet II”, which is all done in fun, is kicked to the curb. Sad. 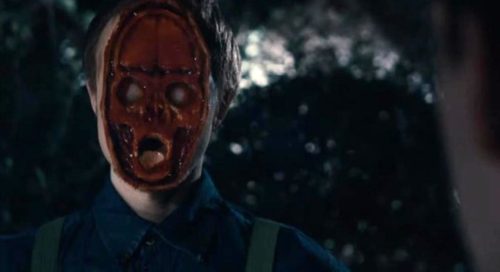 So, after watching the Bluray, I still have to admit that this is one of the best slasher-films I have seen in a long time. There is nothing new about it, but it is not hollow like some of the garbage coming out these days. Green’s film is an acknowledgment to slashers of yesteryear. The 1980’s were a golden decade for this particular sub-genre, and somewhere along the line, the ambiance from films like “Friday the 13th 2” and the original “My Bloody Valentine” got lost. Three director’s I have noticed trying to bring this back (and doing a great job) are Joe Lynch (Wrong Turn2), Ti West (The Roost, House of the Devil), and Adam Green.

While the acting may come off poor to many people, it is what is needed in a film of this ilk. Kane Hodder has to a give a performance that is probably the most emotional in his career (even more so than his role in the first “Hatchet”, as the sequel’s origin story is significantly expanded); and while it’s not award worthy, it’s still good to see the guy broaden his range. Hodder has been stuck behind a mask or doing stunts forever; it is awesome that Green gives him bigger opportunities, while still letting him excel in his familiar areas, as well. Victor Crowley is genuinely one of the most badass killing machines since Kane Hodder graced the hockey mask of Jason Voorhees.

I love Danielle Harris. I grew up watching her in the earlier “Halloween” sequels, “The Last Boyscout”, and in “Don’t Tell Mom the Babysitter’s Dead”, and she is a real pleasure in person. Having said that, if I had to pick someone out of this film whom does not feel like they are giving it their all, it has to be her. Sometimes she is just a little too much; I feel that it was probably awkward for her to work into the lead role, due to it being played by another actress in the first film. Do not get the wrong idea, she is in no way terrible, and she definitely progresses as the film does; but in other sympathetic roles, I have seen her do better.

As if Hodder, Todd, and Harris were not more than enough to get horror fans excited about “Hatchet II”, the film continues to seep out the ends with genre veterans in cameos and supporting roles. It is obvious that everyone involved has a lot of fun working together, and it sets the fact in stone that this series is for the fans, made by a fan.

Robert Pendergraft and Aunt Dolly’s Garage provide the creature and make-up FX, and they are completely awesome. It is said that over 120 gallons of fake blood were used (more than double the first film), and I believe it; the stuff is flying far and wide. Every kill trumps the one before it, and they are some of the most imaginative, over-the-top gore sequences in recent memory. This film also has one of the highest body-counts in a single film in slasher movie history, keyword here being “slasher”.

For fans of this variety, “Hatchet II” is a necessity. It is like re-living a 5th grade sleepover, where you stayed up late to catch “Jason Lives” on HBO. For me, it provides that feeling to a tee. It has happened before, but hardly ever does a sequel come out that owns the first film in every way. In my opinion, this is one of those seldom moments.