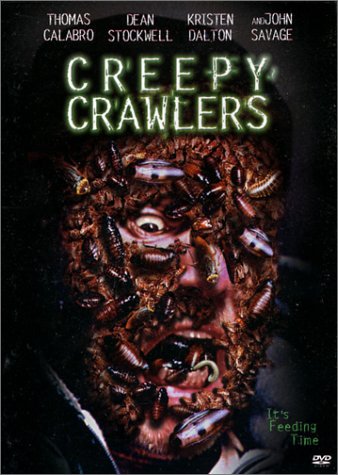 We are starting a new feature here at Slasher Studios. We bring you our very first tweet-by-tweet movie review today from guest horror critic Tim Schilling. The idea behind the concept: We take a movie and give you a running commentary through twitter. After the film is done, we will post the review over here at Slasher Studios. Sounds like fun, right? Well today’s movie is the wonderfully cheesy “Creepy Crawlers” (also known as “They Nest”), a made for television gross out flick from 2000.

“Creepy Crawlers” begins with our hero, Dr. Ben Cahill, a nab stressed by marital problems and alcohol that he freezes up under pressure in the emergency room. To get his act back together, he decides to unwind a few months in the house he and his ex bought on Orr island, an insignificant (former) fishermen place off the coast of Maine. He almost immediately becomes the butt of spite from a gang of local nobodies. After the doctor started examining, at the request of the reasonable sheriff Hobbs who leans to his side, some animal and human corpses with strange internal as well as external injuries, one of the brutes, not so handy handyman Jack Wald, has a fatal nocturnal accident crashing into Dr. Cahill’s car.

The doctor observes one of the red cockroaches which recently infest the island has pincers, most unusual, reads up and contacts the university entomology department, where this African species isn’t too well-known either. Jack’s even dumber brother Eamon Wald uses violence which ends up causing the sheriff’s death, so the doc has no other help then the enterprising local store clerk Nell Bartle, who takes a liking to the only educated men around, to continue investigating fighting off Eamon’s gang and as they find out how bad the danger is, try to evacuate…

Thoughts before the film:
#CreepyCrawlers don’t even know what it’s about, chose this movie based on the DVD art. Bad idea? we’ll seeeee….

Overall:
I was surprised at how good #CreepyCrawlers was. Different music, funny at parts, cared for the characters, and overall good production.