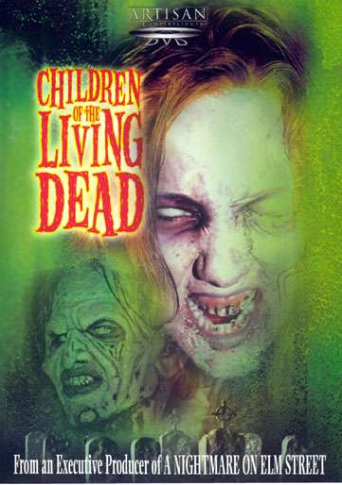 Today we have for you slasher fans the tweet by tweet review that started it all: Children of the Living Dead. Have you seen this craptastic modern classic? If so we feel sorry for you but who doesn’t love a good-bad horror movie? Especially one that includes zombies and really bad effects. Big thank you to Tim Schilling for taking the bullet for us on this film. Please note that there are no minute marks as this twitter review has written before we started this feature on the website.

Tim’s thoughts while enduring Children of the Living Dead:

Oh man.,. Here we go. I didn’t make it half way through the first time I tried to watch this.

I’ll still love Tom Savini no matter how bad this movie is gonna be.

That blue filter was annoying as hell.

How is this supposed to be a direct sequel if the zombies don’t even act the same?

The dialog is matching the actorsâ€™ lips 1% of the time.

Lololol how does a zombie get stuck in a barn for 14 years!?

I hate calling someone else’s movie bad… But this is terrible.

Iâ€™m not sure which of the 43 plots I should be following.

That dog was a stuffed animal. What was this budget, $100?

I see you sneaky cameraman.

“Don’t make contact with their teeth.” why don’t you just say don’t get bit?

Where did hyena zombie go?

Overall:
I truly hate calling a movie bad, but #ChildrenOfTheLivingDead was just terrible, and I’ll leave it at that. *hyena zombie noise*

Zombies are still fucking awesome though.