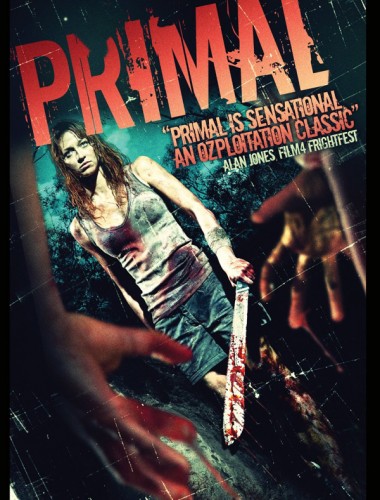 Busy day here at Slasher Studios. Not only did we have for you FIVE brand new overrated horror selections but we also have for you another tweet-by-tweet review from our guest film critic Tim Schilling! Know the concept by now? We take a movie and give you a running commentary through twitter. After the film is done, we will post the review over here at Slasher Studios. Tim takes a look today at the Australian horror film “Primal.” Let’s just say that it is no “Wolf Creek”….

Thoughts before the film:
Only reason I’m watching this movie is cause I’m too lazy to put a DVD in. Thanks for on demand. #Primal

Thoughts while watching:
0:03 Sick intro/time lapse thing.
0:08 It sounds like each one of these people are speaking different languages at parts, I don’t understand a thing.
0:14 What is this chick’s name and why does it sound like people are screaming Chinese when they talk to her?!
0:15 I’m not really feelin it so far. Nothing has even happened haha
0:15 “Get your winky wet!” crazy Australians. Or whatever these people even are.
0:20 Who just carries around salt ready for something like that??
0:25 I seriously cannot understand what these people are saying. Anyone else have this problem while watching this?
0:26 Her tooth fell out. Great, now I’ll have a nightmare somehow related to my teeth. Happens every time.
0:30 *yaaaawnnnn*
0:30 I take that yawn back.
0:34 Oh poor kangaroo… at least I know that these people are Australian now…
0:35 I will say this movie has some nice camera shots. Some, key word.
0:41 This disease apparently turns you into a ninja.
1:08 What is this, an action movie now?
1:14 This bitch wasn’t 9 months pregnant 5 minutes ago…
1:17 This is like 8 different stories trying to be one movie.

Overall:
#Primal was basically a not so great mix of 28 Days Later, Cabin Fever and The Ruins.. Even though I only saw parts of The Ruins.