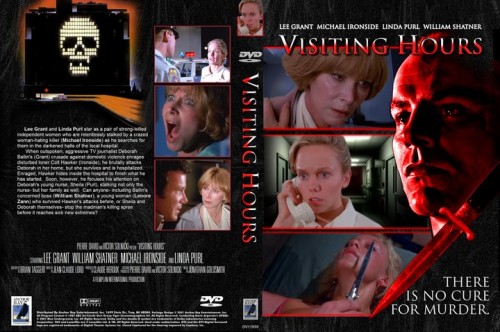 A fun, serious little chiller that either gets no recognition, or a load of hate. Why, I’ll never know, because I prefer it immensely to Halloween II, another hospital-set thriller. Starring Linda Purl, Lee Grant, Michael Ironside, and William Shatner (for name value only… he serves no purpose in the film), it tells the story of a sadistic, woman-hating psychopath who fixates on two strong-willed women and stalks them in the halls of a hospital.

Lee Grant stars as Deborah Ballin, a television journalist who is getting both a lot of praise and a lot of flack for vehemently defending a battered wife managed to cripple her husband in self-defense. She never expects it to escalate to murder, however. Sadistic psychopath Colt Hawker (an often-chilling Michael Ironside), who suffers from extreme mommy-issues, attacks and leaves her for dead. When it is reported (rather widely, of course) that she is alive and in the halls of County General hospital, Hawker decides to finish the job. When he cannot find her, however, he fixates on her caring, idealistic young nurse, Sheila Munroe (played by Linda Purl), who has struck up a rather strong friendship with Deborah.

Stalking Sheila and her two children at home, Hawker devises a plan to kill both women once and for all. Can anyone- including a teenager with a grudge (Lenore Zann), Deborah’s concerned boss (William Shatner), clueless cops (like the one who tells Sheila he cannot leave his post at the hospital… despite her telling him that the killer is in her home), or, well, obviously, Deborah and Sheila themselves- stop Hawker’s (not-so-)bloody killing spree?

First off, yes, I know the movie has it’s flaws. The villain, while played to perfection by the always-creepy Michael Ironside, does come off as incompetent by the third act… but at this point, of course, he has both Sheila and Deborah right where he wants them, despite all of his other feeble attempts ending in utter fiasco. William Shatner’s character is little more than a hindrance to our two strong heroines, and the point-of-view jumps around quite a bit between it’s four leads- Deborah, Sheila, Hawker, and Zann’s Lisa (who is conveniently forgotten once Sheila and Deborah are in peril), but that, I think works to its strength. At this point in time, two women sharing the role of the heroine was practically unheard of (outside of Psycho, where it was the only option after Janet Leigh’s exit), and I love the fact that Visiting Hours starts with one heroine and then focuses on another for a good portion of the movie. In fact, I’d be willing to bet that Linda Purl, despite appearing twenty minutes later than Grant, has just as much if not more screentime than the latter.

During the final third (the climax begins in Sheila’s home and follows her to the hospital, where Hawker plans to sneak up to Deborah), the movie is pretty evenly split between our two leading ladies.

Michael Ironside, as stated above, is a truly chilling villain, when he isn’t being a complete moron. Linda Purl is cute and plucky as the frantic Sheila, and Lee Grant is effective as Deborah.

This is a very underrated horror film in my opinion, and while it is no classic, it is DEFINITELY worth a watch.