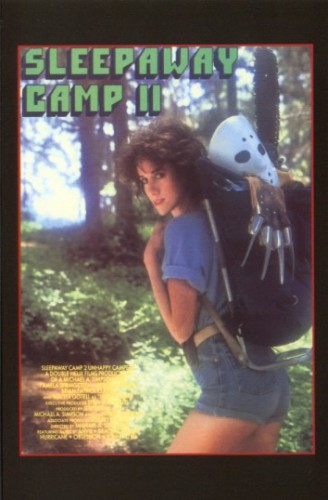 I saw part 2 before seeing parts 1 and 3, so that might have to do with why I prefer this sequel out of the entire series, or it might just have to do with the fact that this film is just totally amazing on all levels! This film probably has the most one-liners of all horror films! how many times have we all typed the entire screenplay to each other one quote at a time in comments? I’m pretty sure I’ve done the entire movie at least 3 times over with you guys. Always a blast! This film also has one of the biggest body counts ever. i believe it’s like 19 or 20!

Angela Baker/Angela Johnson has become one of my favorite horror movie antiheroes. She’s ruthless, fearless, relentless, psychotic, and has a bangin’ sense of humor! I can’t get enough of her one-liners before/after she kills: “just say NO to drugs!”.. “what are you looking for, a gun?” “no, a drill!”.. Pamela Springsteen is by far my favorite Angela, even though Felissa Rose did a stellar job as well.

Gore fans will not be disappointed with this one. the first 5 minutes has one of my favorite kills, the log to the head and the tongue getting cut off! What a delight! This film pays lots of homage to all the slasher icons like Freddy, Jason and Leatherface (as well as lots of other 80’s pop culture icons like the Brat Pack)! This movie is just a ton of fun for me and it makes me happy. It’s one of those movies i could watch over and over and over w/out ever getting tired of it!