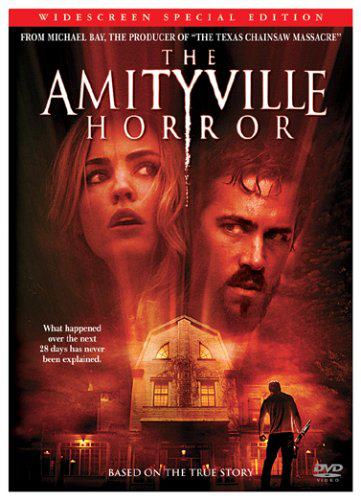 I suppose I let myself down with this one. Amping something up for MONTHS usually doesn’t end in an amazing cinema experience. But neither does 89 minutes of jump scares and string-along storytelling.

To those very very few in the horror community unfamiliar, The Amityville Horror details the “its true because Hollywood says so” story of Ronald DeFeo who ended up murdering his family in a small Long Island town in 1974. A year later, the Lutz family moves in, and before you can say “OOGA-BOOGA”, everything comes out the woodwork, the father goes nuts and the mother is wondering how long her daughter will talk to her new “imaginary” friend.

To pinpoint this film’s troubles is, in itself, trouble. I should probably start off in noting that just about everyone involved with this movie said how close it was going to stay to the book. “The original is a classic, but we’d like to use the book”. Well if using the book means using the title page (which reads “The Amityville Horror: A True Story) well then they’ve succeeded. But instead of celebrating their glory, maybe they should have read a few more pages.

The novel by Jan Anson takes place in diary form. Each day (there are 28 that they stayed) is noted with what happened paranormal or otherwise. When the 1979 film came out, I can understand why this wouldn’t work in a horror form (many audiences reportedly got so annoyed with the “Day 1” “Day 5” “Day Whatever” set up that they cheered when “The Last Night” appeared on the screen). The 2005 remake takes to using 2 titles: Day 15. Day 28. Just a little odd don’t you think? One might get the idea to just scrap the title cards all together. After all, storytelling and film making has changed greatly since 1979 and title cards aren’t required.

Subtle scares that we’re once present in the book and original movie (the smell of perfume in an empty house, a disappearing stranger, moving of objects, moving shadows, etc) we’re instead scrapped for more “jump” thrills (so many in fact, that if you look at the “Scare Reel” of the DVD which has all the scary moments: its only about 2 minutes long. NOT very impressive) : the closing of a door reveals a dead Native American, the moving of a body reveals a hanging girl, a locked closet reveals said girl again. Sure they work for a second, but the dread and fear present in many other (far better) films stick with the mind longer than a jolt.

If only this one followed the original book as promised, a lot more could have come from it. It seems like everything was made as a quick teen cash in. The most obvious is the “hot babysitter” who is there for cleavage and pot smoking only. Oh, and to be locked in a closet. CGI GALORE and scenes that weren’t present anywhere in any original source material. For dramatic effect, one can understand, but when that little girl climbs onto the roof…come on. Maybe as a Long Islander and Amityville fan since 8 years old, I’m slightly jaded. It’s like someone babysat my child, beat him and handed him back telling me he’s good IF NOT BETTER than before. Hey…maybe it was the Lutz’s babysitter!