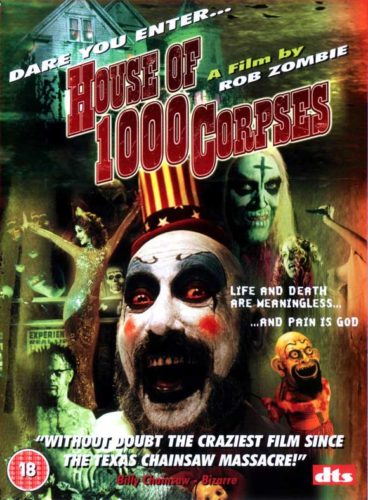 Rob Zombie has always been one of my favorite “new” filmmakers (especially considering that he has only made four films). “The Devil’s Rejects” and his “Halloween” remakes rank as a few of the horror high points of the last decade. Still, I’ve never been able to warm up to the grisly “House of 1000 Corpses.” Possibly I need to give it a new watch from a fresh perspective. Today, our twitter reviewer Tim Schilling is taking another look at the film that started Zombie’s filmmaking career.

Thoughts before the film:
This will be my second viewing of #HouseOf1000Corpses. I haven’t seen it in a few years, but I think it’ll hold up.

Thoughts while watching:
0:01 It just tastes so damn good! Bawkabawkabaaaawk!
0:06 I actually really like the song House of 1000 Corpses. I had it on repeat after I first saw the movie.
0:09 Sid Haig is really freaking scary in this movie. Even though he was ‘just kidding.’
0:15 Where can I take this tour!?i If only it was real.
0:25 Zombie’s movies are shot different than a lot of movies. But also shot great. I wanna know where he got that from.
0:40 3/4 of Zombie’s movies take place on Halloween.
0:44 These cutaway scenes they’re doing when they show the other characters in that grainy like film is great.
0:51 Those people were like waiting under the blankets for that girl… are they gonna eat her!?
0:52 Geez he just answered the question wrong, you don’t gotta chop his head off for it!
0:58 No one in this family brushes their teeth. Grossssss.
1:00 The scene when they’re killing the cops. Pretty freaking great.
1:03 That is one creepy sex shop.
1:03 Bill Moseley is kinda similar to his character in TCM2 but not as crazy. He was just nuts in that one.
1:06 The music when they’re walking to see dr. Satan is so creepy and good!
1:10 This movie in general reminds me of TCM a lot actually.

Final Verdict:
I think #HouseOf1000Corpses is a modern horror classic. It pays homage to tons of older movies while still being very different. It was also shot GREAT, and had good music. I still wish Zombie would do more features more often.