Welcome to Day 2 of “Inspiring Scares” as Slasher Studios is back with a brand new horror filmmaker disccussing the horror film that inspired him to become a horror filmmaker. Axel Kohagen has written many reviews for Slasher Studios including Blood Games, Popatopolis, Vile. He also writes his own horror style blog which can be viewed at the link below. The horror writer is here to share his “Inspiring Scare”: Return of the Living Dead. 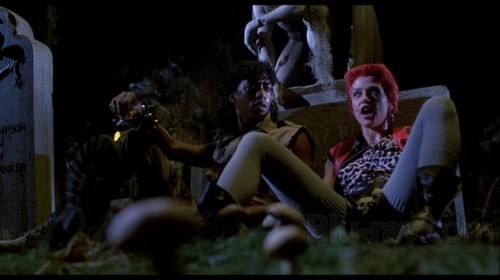 “When I watched Return of the Living Dead for the first time, I was a high schooler cleaning my room. The movie rumbled through my giant VCR and images of comic punks appeared on the bulky, small-screened television sitting on top of it. Iâ€™d never talked to anyone who liked the movie, so I didnâ€™t regret sifting through mounds of floor trash while Trioxin-245 brought a cadaver to life. When the zombies thrust their skeletal heads from graves to the tune of .45 Graveâ€™s â€œParty Time,â€ I was smirking along with the film.

Then, a half-zombie lady got strapped down on an embalming table. When she opened her mouth, I was done cleaning. Her hair still streaked with blood, the crone explained she ate brains to relieve the pain of being dead. I faced the television directly. Time stopped. Suddenly, being alone in my room felt very lonely.

I settled onto my bed to give the movie my full attention. The wacky pacing, bright colors, and campy acting wasnâ€™t trying to entertain me anymore. Return of the Living Dead was mocking my own mortality, and everyone elseâ€™s. The movie was taking the joke too far, and it was enjoying every minute of it. It wasnâ€™t laughing with me, it was laughing at me. By the time it was done, a character subjects himself to a brutal death to avoid zombification as tilted camera angles and a campy Roky Erickson song rob the act of dignity. A zombie boyfriend tries to sexualize the lust he feels for his girlfriendâ€™s brains. A belated call for help, and brief moment of hope, ends in an explosion that wipes out all the characters weâ€™ve grown to care for, and doesnâ€™t even solve the problem. Pure futility.

Over the credits, Return of the Living Dead played highlights from the film I just watched, as if to take a handful of its own nihilism and rub it in. None of these people got out of the movie alive, yet I watched them stumble and bumble one more time. Finally, the movie ends with a question and answer creating by splicing two separate lines from the film.

This last phrase echoes as the film clips stop and the credits continue rolling. Message received, Return of the Living Dead. We canâ€™t trust the movies, but the dead are all coming for us. Whether they move slowly or quickly, want brains or organ meat, the dead are coming and the movies might be lying.

I didnâ€™t expect the campy zombie horror-comedy in the giant Thorn EMI VHS box to make me so very aware of my own mortality, but it did. What if the rules of dying arenâ€™t fair, and what things do get painful and terrifying when they lay you down in the ground? The movie was supposed to tell me a fun joke, and at some point in the middle it became clear life and death were the jokes, and everyone was going to be their own punch line. I didnâ€™t believe in zombies for one moment of Return of the Living Dead, but I was still shaken when I stopped watching it.

Like any good victim of a practical joke, I have decided to do as Return of the Living Dead did. Lure them into the movie with the promise of genre hijinks with the zombies and slashers and vampires everyone wants to see. Give the audience exactly what they want. For a while. Then open up a little door in the back of the theater where the real fears lurk. The audience wonâ€™t notice until theyâ€™re already mixed in with the story and characters theyâ€™re already watching. When they do notice, itâ€™s too late.

And then the masks come off, and the screaming starts. But I wouldnâ€™t do that to you, of course. Iâ€™m just here for party time.”