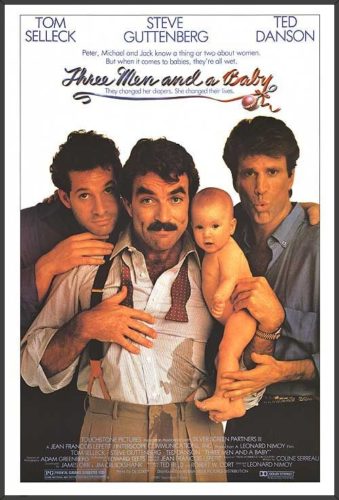 Not Quite Horror contains reviews of films not traditionally considered horror films. By analyzing them as horror films (identifying the monster, discussing the shared worry for the audience and the main characters, and understanding the depth of horror available to the viewer), who knows? There more than one way to watch a movie.

The Monster: Three Men and a Babyâ€™s monster does not come from the movie itself. In fact, this monster is the unintentional result of accident and imagination.

The monster is the ghost of a 9-year-old boy who committed suicide on the set of the film and shows up in the background of a scene, peeking through curtains. Except the scene was filmed on a soundstage and the image of the ghost is really a cardboard standout from an odd angle (if youâ€™re not familiar with this particular urban legend, read more about it here).

The Horror: Reality never stopped a good haunting. The wacky, heart-warming comedy becomes horrifying and upsetting when it is watched specifically for the purpose of finding the boyâ€™s ghost.

The movie is about three bachelors opening their hearts to love a baby left on their doorstep. Watch the same film to see the ghost of a sad, dead boy and the joy turns to a powerful sadness. What would go through the mind of such a lost soul? How dark and angry would he become, watching and waiting? Who could blame him?

The Shared Fate: People die. More than that, they die in all sorts of places. If a PG rated family comedy can be haunted by a dark force, can anywhere truly be safe?

After all, do you know everything that happened in the buildings you work in? Shop in? Live in?

Whatâ€™s peeking through your curtains?