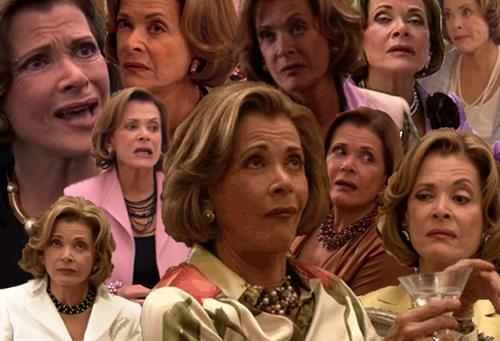 The Monster: Based on Maeby Funkeâ€™s grandmother, or â€œGangie,â€ the titular monster survives by drinking the blood of her victims. Her monstrous face was inspired by Maebyâ€™s Grandmother after a particularly brutal beauty treatment.

The Horror: Whether in the original film, any of its many sequels, or as the real-life Gangie herself, the monster repels anyone foolish enough to face her head on. In this case, the truth is even more frightening than the movie.

Why? In real life, Gangie is never far away from her son. Heâ€™s a self-proclaimed monster with a hook for a hand and a habit or wrecking everything around him.

The Shared Fate: No family is perfect on the inside or the outside.

With time, a family memberâ€™s physical quirk can become an oddity. Add disdain and disappointment and monsters are born in your own living room.

Bound to our families by love, honor, or at very least habit, these physically differences are politically incorrect to ridicule and uncomfortable to discuss. Yet find yourself forced to stare at that nose, or that rash, or that hair for one more minute and . . . This is why Poe wrote â€œThe Tell-Tale Heart.â€

Be honest with yourself. Isnâ€™t there a Gangie lurking in your kitchen, and isnâ€™t she thirsty?