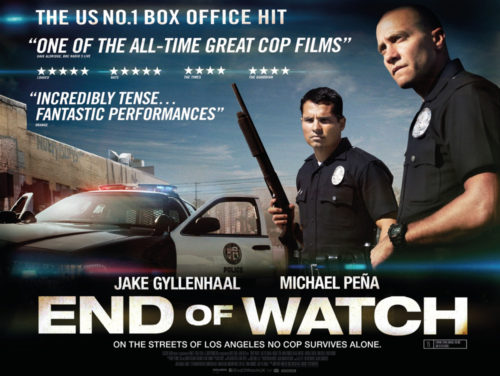 The Monsters: A world of criminals so ruthless and violent they more resemble post-apocalyptic scavengers or dutiful cultists than the stars of a nightly news report.

Police officers Brian Taylor (Jake Gyllenhaal) and Mike Zavala (Michael PeÃ±a) patrol the streets of Los Angeles with courageous energy. Soon, the violence of the streets begins to test their resolve. They first stumble onto a human trafficking ring. Then, they enter a normal-seeming house to find themselves face to face with a mass of dead bodies. Eventually, even our heroes must realize they cannot hope to survive the hordes amassing against them.

The Horror: This gritty found-footage film is bleak enough to make categorizing it as a horror film an easy task. However, a very specific reading of End of Watch as a missing piece from another horror film makes the movie even more rewarding. This film can be read as the story of any couple of police officers from any horror film, in the same way that Rosencrantz and Guildenstern Are Dead fleshes out minor characters from Hamlet.

Taylor and Zavala arenâ€™t really heroes or villains, though the film depicts them in both heroic and villainous situations. They simply try to do their jobs, even when their job becomes hopeless.

The Shared Fate: Our culture may seem adaptable to every personâ€™s goal for individuality, but it isnâ€™t. Few of us are heroes, and most of us learn to be content with our small roles in the grand scheme of things.