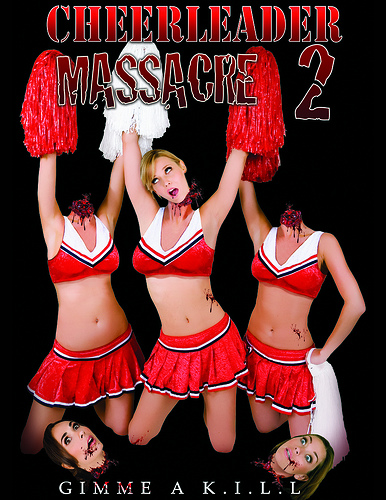 Cheerleader Massacre II is everything you would expect from a bad slasher made in the late 80s. Only difference..it was made in 2011. A group of teen girls with big breasts are going to a cheerleading camp in the middle of the woods. Of course, being a slasher, this is something that is going to end badly for the most of them. We get a back story of a man stuck in the woods who finds a screaming teenage girl who has been stabbed with a screwdriver and is covered with blood. As they get into the car, neither can drive because neither can work a stick shift in one of the most hilarious “huh?” scenes of the film. Ohh…but there’s a twist you see….the girl was the killer the whole time and takes a screwdriver to the guy’s face.

What exactly does this have to do with the central story? Honest answer, not a whole hell of a lot. Why? Because the killer in question here is a flying robot that is a cross between the bowler hat from Meet the Robinsons and the sphere from Phantasm. Yes, a bad CGI killer mini robot is killing these nubile young girls in the middle of the woods. Lots and lots of nudity mixed with lots and lots of CGI blood. The acting gets worse as the breasts get bigger so watch out. Let’s be honest though, you aren’t going to check out Cheerleader Camp II for award worthy acting. If you are looking for a campy good time, you could do a lot worse than this one. It’s Friday the 13th meets Chopping Mall with the amount of breasts of a Sleepaway Camp sequel. If that’s not a recommendation, I don’t know what is.

Note: Nearly half of this film’s running time is spent in the shower. Whether this is a pro or a con is completely up to you.