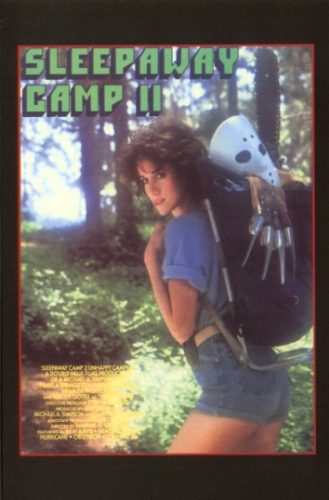 Yesterday I saw Sleepaway Camp II: Unhappy Campers (1988) for the first time. I had previously seen the original Sleepaway Camp (1983) and I found that a pretty good slasher with a noteworthy twist ending, which still manages to shock and controversy to this very day. Going into the sequel I had modest hopes, obviously the character of Angela Baker was portrayed by Pamela Springsteen this time around instead of Felissa Rose. Other than this character, there are none recurring characters in the sequels of Sleepaway Camp. I wasn’t sure about the swap of actress at first but wanted to give it a chance since I’ve been hearing great things from friends and slasher fans.

I have finally watched ‘Unhappy Campers’ and while it lacks in shock value and thrills the original Sleepaway Camp obviously had going for it, this comedic sequel takes a perfect direction with even bloodier and gorier kills as the body count has raised. Pamela Springsteen truly did a bang up job as Angela, I loved her line delivery and comedic chops. Her portrayal is slightly better than Felissa Rose but not by much. Still a very refreshing take on this special character. I also really liked RenÃ©e Estevez and Tony Higgins in this sequel. The characters were fun but very over the top and there were many parts that cracked me up. The nice references, touches and winks to classics like A Nightmare on Elm Street, Friday the 13th and The Texas Chain Saw Massacre were totally on point. As far as watchability goes, the sequel is more watchable than the original in my opinion. Characters were fleshed out better and the acting was a slight improvement over the original. The dark humor in this was spot on but its not considered scary or surprising in my books as opposed to the original.

Still a fun and campy comedy slasher with cool death sequences, a fantastic 80s soundtrack, a hilariously good Pamela Springsteen, fun characters and some witty dark humor. Not a movie I would consider ‘great’ by any means as some is left to be desired, like the non-effective ending but it does offer exactly what it promises and then some. I was not bored for a second watching this movie and would highly recommend it to everyone!