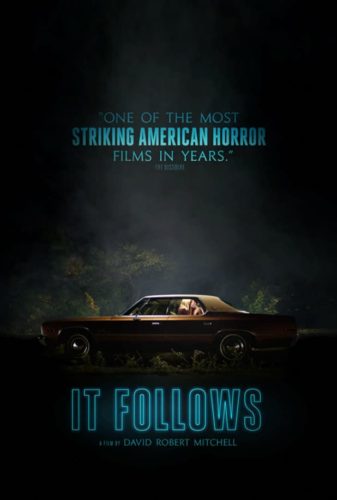 The film follows Jay (Maika Monroe), a young, friendly, and genuinely happy girl. One night Jay goes on a date with a young man and the two end up having sex. Upon doing so she gets knocked out. When she awakens, it is revealed to her that â€œitâ€ has not been transferred to her. She is told that â€œitâ€ will continue to haunt her unless she passes it on. However, if the person who currently has â€œitâ€ is killed by it, the person prior will also die and continue down the line. Jay then begins to find herself being stalked by mysterious presences. She then enlists the help of her friends in order to help escape the curse.

It Follows is written and directed by David Robert Mitchell. Iâ€™d read a great amount of buzz about this film and I became extremely excited for it. The film did not disappoint at all. The story is an extremely cool concept. It takes the idea of sexual activity and the diseases along with it and flips it. The film is truly terrifying in that there is so much that is left unknown. We only get a vivid idea of what â€œitâ€ is, but we are left just as clueless as Jay. It is because we are left with this unknown feeling that help make the film extremely terrifying. The whole film kept me on the edge of my seat with many intense and scary moments.

I wonâ€™t reveal any of these moments because they have to be seen in order to be felt. The presences that Jade sees are much more terrifying than I expected, a lot of this is due to how they are presented. Again, I wonâ€™t reveal exactly what makes them terrifying, because again, it has to be seen to understand. It is essentially something almost out of someoneâ€™s nightmare (ironically Mitchell was inspired to make the film because of a nightmare he had).

We are also given a group of VERY likable characters. Jay is an extremely likable lead and we really become connected to her and hope she makes it out okay. She is also played amazingly by Maika Monroe. Monroe is truly a discovery and a very talented actress whom I hope to see more of in horror. Hell, more of in general. The friends that the character Jay has are also extremely likeable. They come off a realistic and they are hands down the most dependable friends Iâ€™ve seen in a horror film. More often than not, the friends will believe the lead is crazy and donâ€™t believe her. Here, they stand by Jay throughout the whole film and do what they can to help her.

Each of the actors provide great comedic timing with some of their lines, and you can really feel the chemistry amongst the group. Just a brilliant cast and performances. One thing that I just marveled at during the film was the EXCELLENT score. I cannot stress enough how amazing it is. Itâ€™s so perfectly used in the scenes and also what makes the scenes so chilling. It gave me the same feel as the scores of Halloween and Nightmare on Elm Street and some of Texas Chain Saw Massacre combined with Suspiria.

Luckily I was able to catch an early screening of it at the Fargo Film Festival a whole week before its actual release. The producers did a Q&A after the screening and revealed that a lot of their inspiration for the film as far as its atmosphere and tone and filming style came from classics like Halloween, Nightmare on Elm Street, and Scream. This I agree with wholeheartedly, I could totally sense elements of each of these films in it. Which also added to one of the reasons I genuinely loved the film. It Follow is easily the best original horror film Iâ€™ve seen in a LONG time. It is genuinely scare, has some good laughs, great characters and story, and solid performances. It is a film that will definitely stay with you after you see it.