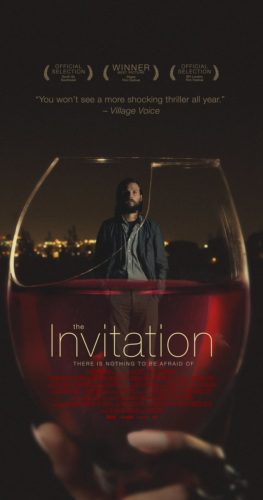 A man and his girlfriend are invited to a dinner party by his ex-wife and her new husband after she disappeared following the death of their son. Also invited are mutual friends from the exes past. As the night goes on, things start out innocent enough, but the man starts to suspect that something is not right about his ex-wife and the new man in her life. It isnâ€™t long before he feels himself start to unravel and question whatâ€™s going on around him.

This slow-burn horror/thriller is the latest indie film to really keep my attention. Following the ranks of The Witch, The Invitation takes on a different disguise in making you feel uneasy about what you are seeing. While it certainly isnâ€™t as disturbing, it definitely makes you question yourself as much as the lead is. The group of characters is quite large, when this happened, I found myself thinking that some of the characters may end up being underdeveloped. I was definitely wrong. Each character is very well-developed enough to where you get a strong sense of who they are. And besides the obvious ones, all of the invited guests are likable, which I was also surprised about. I will say that there were certain characters I did want more of, but thatâ€™s only because I liked them that much.

For a moment this hardly feels like a horror/thriller, it seems like an innocent get together amongst old friends, but then the rug is just pulled out from underneath you and things suddenly change. Iâ€™m not saying itâ€™s super suspenseful, but it is very much on the edge of your seat where you are so engaged and you have no idea how this will all escalate. As I said above, you are also questioning your own sanity as to what you think is real. This is because the film is shown through the point of view of our lead and it perfectly captures how heâ€™s viewing things and we can see why heâ€™s viewing it at that, but we get thrown curveballs that can leave us out in the dark. Itâ€™s very rare that I see a film that keeps me as engrossed or questioning whatâ€™s going on, and this is definitely one of those films.

As for the cast, each cast members does very well with their parts, but most especially our lead male Logan Marshall-Green as Will. For the reasons stated above, he does a tremendous job as a man questioning not only everyone at the party, but also himself. There are moments of amazing subtlety in his performance and moments where he freaks out and comes off as very realistic, and itâ€™s really easy to feel for him and put yourself in his shoes and just get on his level. Also worth noting is Tammy Blanchard as Willâ€™s ex-wife Enid. Sheâ€™s another one who does a great job of using subtlety in her performance. Thereâ€™s just so much in her performance and how she carries herself throughout the movie that makes you question whether sheâ€™s trustworthy, or if she is as innocent as she appears. And of course there is John Carroll Lynch who does a great job in his role as the creepy man who appears at the party to where you donâ€™t keep your eyes off him because he comes off as that sketchy.

The Invitation is a solid horror/thriller that keeps you engrossed all the way through with the likable set of characters, a story that keeps you guessing, the escalation of suspense, and just the self-questioning throughout until the intense climax.