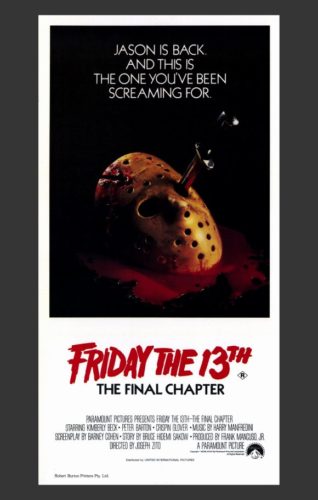 One more tweet by tweet review as Tim Schilling dives deeper into the Friday the 13th series, this time reviewing Friday the 13th-The Final Chapter. Many fans feel this is one of the best, if not the best sequel in the series. Let’s find out what Tim thinks..

Thoughts before the film:
I have a feeling this series streak can’t last too long. Already a quarter way through them! #FridayThe13thTheFinalChapter

Thoughts while watching:
0:01 Whoa! It’s starting off with a flashback!
0:03 Well the awesome title sequence didn’t last too long in this series.
0:10 But Jason got an axe in his head the last movie. How is he still alive?
0:12 Holy Jesus Christmas shit!
0:14 I liked the hospital setting. They should have stayed there longer than they did.
0:19 Who made a stone and buried Mrs. Voorhees?
0:24 Tommy, what kind of freak out was that?
0:31 Pretend dying is so old.
0:33 Is this guy a Jason hunter or something?
0:40 Everyone is so weird in this one.
0:47 What a way to die.
0:49 The cabin these people are staying like looks eerily similar to the Psycho home.
0:51 When isn’t is raining?
1:02 Random super powers activate!
1:18 Jason’s favorite past time is throwing things, people, and himself through windows.
1:24 Someone should just cut Jason’s hands off and none of this would happen.
1:26 Tommy with his head shaven is more scary looking than Jason without his mask.

Overall: While #FridayThe13thTheFinalChapter was still fun to watch, the story is getting a little redundant. I liked the ending, however, but since there’s like 8 more movies left in the series, it kind of ruins it.