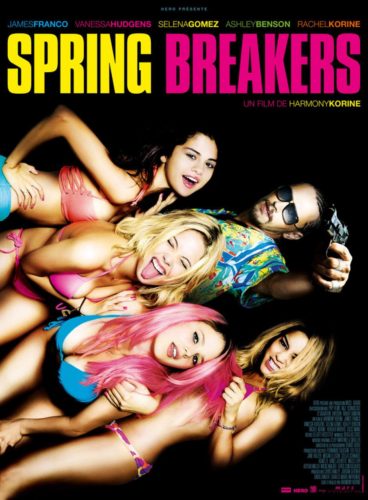 The Monster: Spring Break itself. The collegiate tradition of breaking societal taboos somewhere in the south is well known. The event is spoken of, in the film, with hushed and reverential tones. The world before spring break is bland, dim, and must be escaped.

In this film, spring break starts with a few drinks, leads into drugs, and ends up spattered in blood and full of bullet holes.

The Horror: In reality, spring break combines hormones, developing brains, and limited experience offer plenty of opportunities for horrific disasters. The teens in Spring Breakers push the envelope of violence even further.

The movie mixes this violence with societal images of being a girl â€“ pink clothes, Britney Spears songs, loud giggling, and even the presence of actor Selena Gomez. This societal construct of femininity contrasts with the gritty violence the film devolves into, making viewers uncomfortable as they are forced to re-examine their own belief systems.

The Shared Fate: Scare films are nothing new. However, with more permissive censorship guidelines for television and film (and with the wild freedoms of the internet), itâ€™s getting harder to shock audiences with whatever debauchery the youth is (allegedly) up to at the moment.

Spring Breakers does the best it can to scare everyday people by pushing things further, suggesting the world has moved into utter chaos and wonâ€™t come back. Or, as Alien (James Franco) repeats â€“ â€œSpring break forever.â€