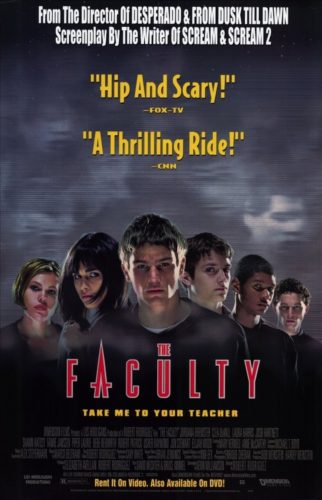 For no real good reason, I had put off checking out The Faculty for years and years. I was never a huge fan of Josh Hartnett, so I was turned off right away. I had also heard a few things here and there about the alien abduction and
thought, “ehh.” Well, on a random stop at Goodwill, I spotted The Faculty on VHS. It was half off (blue sticker week), so I decided to take the chance. I popped it in the VCR that night and was pleasantly surprised.

Overall, I must say this was an enjoyable film for myself. I am usually into the straightforward slashers, so this was very much out of the norm for me. I found myself wanting to follow these characters and impressed with how the story
progressed. I thought the school location was perfect and the lighting, cinematography and direction was done without many flaws whatsoever.

When it came to the acting, I didn’t really hate anyone. Instead, I enjoyed most of the characters. John Stewart was a fun addition and Jordana Brewster was looking great as always. Josh Hartnett plays a great…Josh Hartnett, nothing
crazy great about him. With Usher on the cover, I was really expecting him to play a bigger part, but maybe that was for the best. There was some CGI at times, but I didn’t mind it too much as I was more entranced with hoping to get another glance at Laura Harris.

This film has a great look, steady pacing and solid acting. A big surprise in my eyes. This was a great find and well worth the two quarters I paid for it. I will always have a soft spot in my heart for 90’s horror and The Faculty is helping to keep it that way.