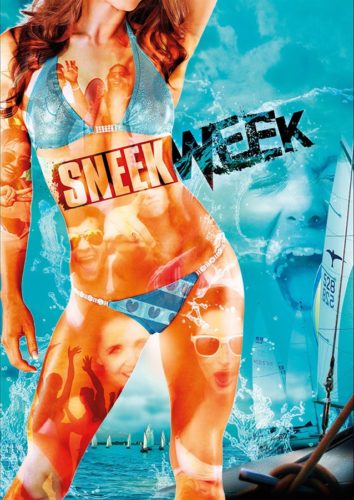 First off I want to apologize for the extreme delay of this review. Two weeks ago I watched the Dutch horror/slasher “Sneekweek (2016)” in theaters with my sister. I was anticipating the release of this movie for a long time. Mainly because Dutch slashers are a rarity these days and only a handful of them are being made every decade. The trailer for Sneekweek looked promising and exciting, but at the same time it felt like I had just seen the entire movie. With no high expectations I went on to see it and I have to say that it was SO MUCH better than I expected! As it turns out the trailer didn’t reveal many important plot points and the fate of some characters. It’s I Know What You Did Last Summer meets Scream in the best possible way and that results in an awesome whodunit.

The cast is super good looking and the actors do the best they can with the material they’re given. The standouts to me were: Carolien Spoor, Jord Knotter, Holly Brood, Marly van der Velden, Sanne Langelaar, David Lucieer and Jelle De Jong. I love how bad-ass the characters were, to the point where they had to fight hard for survival. The kills were graphic and surprisingly innovative. The murder weapons that were used in the movie are really inventive. Sneekweek has a running time close to 2 hours – which is a little longer than usual for slashers, but you can clearly see that it worked as a mood setter and I honestly wasn’t bored for a second throughout the movie. This movie features quite some winks and homages to Scream and I Know What You Did Last Summer and it’s evident that the director is very passionate about the genre. This movie scores high on the laughs and scares. The murder mystery is well crafted and at some point every character could’ve been the killer. The soundtrack is stylish and features lots of popular songs. The camerawork and cinematography in this movie are nothing but superb. The final act is exciting and satisfying at the same time and that’s when the shit literally hits the fan with the twists and turns. This movie doesn’t hold back on the (male) nudity, which is always a good thing with these type of movies.

Most critics panned Sneekweek and I was expecting nothing more than a campy guilty pleasure, but I was in awe by how much I ended up loving it! Is it perfect? No. Does it require a lot of thinking? No. Did I have a fun time while watching it? HELL YES! It easily became my favorite Dutch slasher and I suggest every horror/slasher fan to seek it out give it a view, but be sure to keep your expectations low. Hope to see it in theaters one more time before I purchase the Blu-ray. I could watch it over and over again. A future classic!