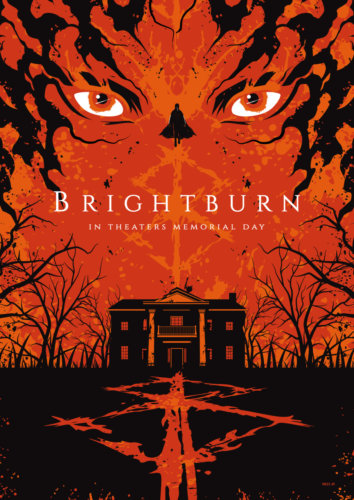 A couple who is unable to conceive, come across a baby who has seemingly fallen from the sky. They raise the boy as their own and name him Brandon. As Brandon grows older, he starts to develop mysterious abilities, but as his abilities grow stronger, the live of his parents, and the people of Brightburn find their lives in danger.

Brightburn is an evil kid horror film that essentially comes in the form of a re-telling of Superman/Clark Kent if Clark grew up to be evil. This is the filmâ€™s biggest strength. It tells a solid, entertaining, and original story for an evil kid film. Where it weakens though also lies in the script. The story is good, but the script is really rushed. We donâ€™t much development or establishment of Brandon and his family, nor do we get much of Brandon and the people he encounters in town. We are only given bits and pieces. It would have been nice to see these relationships as well as the development of his abilities as the film progresses.

All of this said, the film still does entertain and gives us some nice gory scenes, and we also are given a pretty dark ending the feels like a punch in the gut in regards to a particular character, this all after a pretty intense final 20 minutes that slightly makes up for the lack of thrills we had prior. For a small budget, the effects actually look pretty well-done. In terms of acting, Elizabeth Banks turns in a fantastic performances as Brandonâ€™s conflicted mother who feels torn between the love of her son and the obvious signs that something isnâ€™t right with him. The rest of the cast does a fine job as well. Unfortunately, one of the most important elements of a creepy kid film is the performance of said creepy kid. Jackson A. Dunnâ€™s performance as Brandon is extremely bland and lacking in the creep factor, this also doesnâ€™t help the film in the creep factor either. Despite the rushed script and lack of thrills, the movie does set itself up for what could be a very promising series, one that I definitely would continue to watch for Brandonâ€™s growing rise to evil.