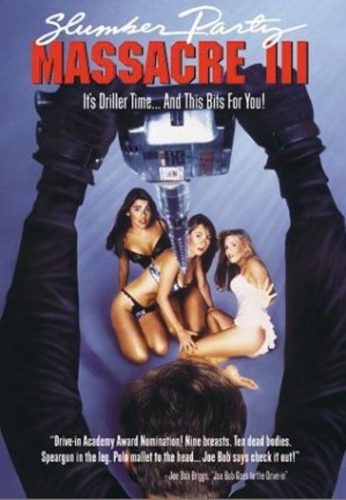 After reaching its peak in the early 80s the slasher film still slashed along through the 80s even if they werenâ€™t as successful there was still enough of a following to keep making them and by the mid-80s slasher flicks started to become a little more light in tone and many were even satires even if Scream gets all the credit for starting that. Slumber Party Massacre III was released in 1990 and in many ways is one of the last of the 80s style slasher flick. By this time the market for these movies were starting to die out as even the major franchises such as Halloween and Friday the 13th were seeing their lowest box office numbers.

Slumber Party Massacre III like the previous two retains the campy tone, but also adds a little more meanness at times and sort of borders on exploitation and while this sometimes does work well, but mostly it falls sort of flat. Slumber Party III is more of a remake of sorts rather than a sequel. Many scenes mirror the original, the plot is mostly the same and some of the names of the characters are the same as those in the original. The plot for Slumber Party Massacre III as stated is pretty much the same as the original though all 3 movies have the same basic plot; Jackie (Christian) with her parents away decides to have a slumber party and of course the boys show up to scare them during the party, but a killer also shows up and begins to dispatch the characters.

The screenplay by Catherine Cyran is rather weak and while she tries to mold her script in the style of the original film it really doesnâ€™t work as well. The characters are one dimensional, but they are fun however even if they lack any depth, but I donâ€™t think we go into slasher films for the deep characters. The script has its fun moments, but the fact weâ€™ve seen this done twice before things donâ€™t work as well this time around. Slasher films in general arenâ€™t known for their smart characters, but Slumber Party III has some of the dumbest characters to ever grace the slasher film.

Director Sally Mattison delivers an uneven pace to the film; Slumber Party Massacre III at times can be a bit slow and the fun level never reaches as high as the first two films and as stated earlier SPM III also adds a bit more darkness and Mattison never really handles either of these two elements very well for the most part. At times there is a fun atmosphere to the movie and like I said the characters arenâ€™t developed, but they are fun, but something just wasnâ€™t working and in the end Mattison follows what the previous filmmakers did in their movies and that sort of sinks the production.

The darker scenes sort of feel out of place and are handled rather sloppy and they arenâ€™t very dark or disturbing even if that was the goal of Sally Mattison. I like the idea Mattison attempted to try something a little different with the movie, but besides that Mattison never really delivers a movie as fun as the previous two and the darker scenes just feel out of place.

As I stated Slumber Party III features some of the dumbest characters any slasher flick has seen. The characters are trapped inside a house, but none of them even attempt to break a window to escape, though late in the movie one girl does jump through a glass door and while I hardly ever complain about stupidity of the characters in Slasher flicks this was just downright annoying in how dumb they were. One scene has the killer who is partially blinded attempt a sexual assault and the rest of the girlâ€™s just stand by and watch. Even though his back is to them and his weapon is a couple of feet from him they donâ€™t attempt to make any move.

However the best part is when they knock the killer out one girl wants to kill him and the other girl replies with how you canâ€™t just kill somebody thatâ€™s lying there. Even though this guy just killed their friends and is trying to kill them it would be wrong to kill somebody just lying there. This may sound funny and in many ways it is, but it also shows the utter stupidity of the characters and itâ€™s more annoying than funny.

The identity of the killer is fairly obvious, but itâ€™s kept a mystery through the first half of the movie, but oddly enough the trailer totally spoils it. Unlike the first two where we know who the killer is from the very start SPM III attempts to give us a couple of suspects, but its kinda funny how the trailer would give it away.

Itâ€™s kinda difficult to fully dislike a movie where on character is killed with a vibrator, but overall SPM III just doesnâ€™t work as well as the previous two. It was a nice attempt, but just falls a bit flat. Despite my review I did find SPM III to have some fun moments and I would actually watch it again, but compared to the first two films this one really lacks and the mixture of light and dark just doesnâ€™t work well; fans of the series should get some enjoyment, but in my opinion this was easily the weakest of the trilogy.