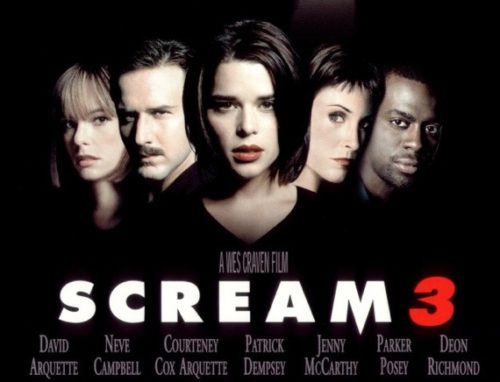 “Scream 3” for some reason has always been the black sheep of the “Scream” family. Maybe the fact that Kevin WIlliamson bowed out of writing early on left fans filled with dismay. Truth be told, it isn’t very scary and the comedy is played quite broadly as opposed to the satire so brilliantly constructed by the first two installment. But..the question remains…is “Scream 3” really THAT bad or is there some hidden gold behind its rough exterior.

The film begins with Cotton Weary (Liev Schreiber), by called by Ghostface (voiced by Roger L. Jackson) demanding the whereabouts of Sidney Prescott (Neve Campbell) who has gone into seclusion since the events of Scream 2. He refuses and both Cotton and his girlfriend Christine (Kelly Rutherford) are murdered. Detective Mark Kincaid (Patrick Dempsey) meets with Gale Weathers (Courteney Cox) to discuss the murders prompting her to travel to Hollywood, where she finds Dewey Riley (David Arquette) working as an advisor on the set of “Stab 3”, the third film in the film within a film series based on the Ghostface murders.

After Ghostface kills “Stab 3” actress Sarah Darling (Jenny McCarthy) he begins taunting Sidney by phone, having discovered her phone number, forcing her out of hiding and drawing her to Hollywood. As the remaining “Stab 3” cast gather at the home of Jennifer Jolie (Parker Posey), Ghostface kills her bodyguard Steven Stone (Patrick Warburton) and uses a gas-leak to cause an explosion, killing fellow actor Tom Prinze (Matt Keeslar).

“Scream 3” is the kind of movie that has a lot of great ideas mixed in with a few mediocre ideas. The film spends far too much time with Sidney away from the group, alone in the cabin. We want to see Sidney take on evil and put on a good fight. Something that doesn’t happen here until the final act. That being said, Courteney Cox as Gale Weathers has never been better. Given a bitter rival to play against, played by a deliciously witty Parker Posey, she shines in every single scene that she is given. Overall, I think “Scream 3” is a fun film. It may be the worst installment of the franchise but it is still a hell of a lot better than 90% of the horror that is released today.