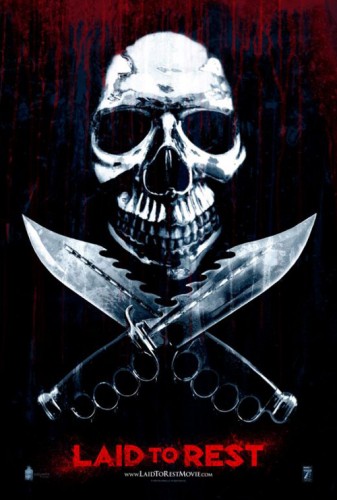 A young lady wakes up in a casket. Once free from said casket, she realizes that she’s being relentlessly pursued by a hi-tech killer dressed in all black with a chrome skull covering his face. And that’s the story of Laid to Rest, in basic terms. Afterward, the movie plays out as a 90-minute chase scene, and I was fully okay with that.

Our heroine has a head injury so painful that a rotgut whisky hangover would be pussy in comparison, and she’s suffering from intense memory loss because of this trauma. When she makes it out of the casket in the beginning, she doesn’t even know what the hell a casket is. She’s in the middle of a funeral room floor, but she doesn’t know what a funeral home is, either. She doesn’t even know who SHE is. The only thing the young lady knows is that she needs to run. Since we do not know who she is, I will address her as ‘No Name Lady’ for the remainder of this review.

There’s not much info given about the killer, other than he doesn’t speak and likes to film his acts of murderous mayhem. But we do know with utmost certainty that ChromeSkull is hellbent on killing the female lead, and if anyone gets in the way, they are committing suicide. I actually enjoy a movie every once in a while that gives little rhyme or reason, and just jumps right into the lunacy. That’s exactly the case here; as soon as our killer appears on screen, he is in the midst of ripping people apart.

The acting is… pretty awful. No Name Lady’s (played by Bobbi Sue Luther, Night of the Demons reboot) main saving grace is that she’s smokin’ hot, and that’s really why a lot of viewers will want her to survive. Kevin Gage (May) gives the best performance as Tucker, a town local that picks ‘No Memory Lady’ up on the side of the road. He doesn’t do anything really groundbreaking here, but he goes through enough rotten shit for you to feel bad for him. Sean Whalen (People Under the Stairs) joins in too, as Steve, a man who’s Mother has recently been claimed by the Grim Reaper. After helping ‘No Memory Lady’ and Tucker with contacting police on his prehistoric computer, he must accompany them on their journey to elude ChromeSkull. There’s also Lena Headey and Thomas Dekker from The Sarah Connor Chronicles series providing some smaller roles, though, Dekker’s eyebrows were on hiatus… dunno what was up with that! Overall, I’m gonna have to go the way of sounding like a sick bastard and say you will mostly be rooting for the bad guy in Laid To Rest.

I’d assume this movie was designed to strongly satisfy gore-lovers, because this shit is out of control. Almost Human Inc. (Quarantine 2) unleash their wizard-like craft on the hapless victims, and it’s all right in your face in a fabulously vile fashion. Severed limbs are everywhere! Nasty gashes, cut off faces, head stabbings… crazy brutal in the greatest way. The FX are by far the best ingredient in Laid to Rest. I’m not sure how many times â€œHoly shitâ€ and â€œWhat the fuckâ€ and how ever many other obscenities poured from my mouth while ChromeSkull was shredding the scenery, but it was a lot!

Robert Hall wrote and directed, and like I said earlier, the story is pretty straight to the point. He does outstanding at getting this beast moving at a nice pace, and you immediately know what kind of film you are in for. I’ll give Hall and cinematographer, Scott Winig credit for giving some brilliant and sinister shots of the killer, especially during the finale. 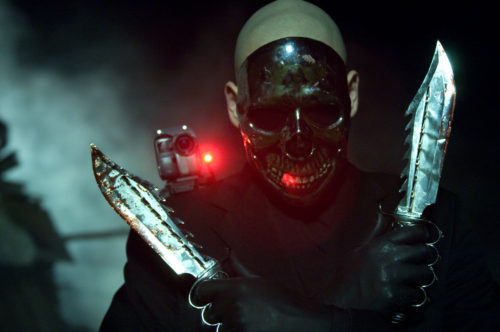 I wasn’t too big on the â€œhipâ€ soundtrack provided. The musical score was just fine, the rock songs were an annoyance. I got giddy as hell during the opening credits after reading â€œadditional music by Suicidal Tendenciesâ€, but either they really suck now, or I was musically gullible in my 80’s/90’s metal mullet-wearing days. I’ll say it’s the former, and not the latter.

Laid to Rest definitely won’t be for everyone, and if you are a strictly subtle horror fan when it comes to bloodletting, I’d steer clear. I’m one of those that appreciate almost every spectrum of the genre in some capacity, and even when I do get disgusted by a movie (A Serbian Film, for instance), I am glad that I at least gave it a chance. With that being said, I am totally glad that I finally caught on with this brutal, no punches pulled slasher.