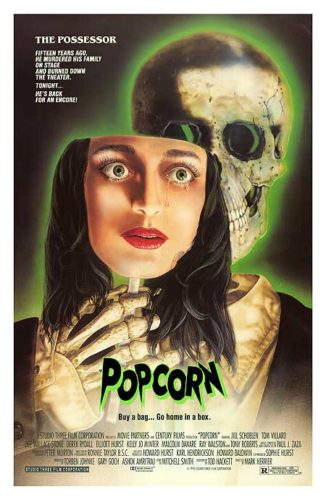 Popcorn is one of the last movies of the slasher era and to me, one of the most under rated and unknown too. This movie starts out with Maggie (Jill Schoelen) having a nightmare of a man trying to kill her, but before any damage could happen, she wakes up. Her mother receives prank calls, having someone call but no one on the other end type of deal. Maggie proceeds to go to her class, Cinema to be exact, where they decide to have a fund raiser at the old, and local rundown movie theater. They then go to the theater where they get it ready for the B-rated 50â€™s horror movies theyâ€™re going to feature in 3 weeks.

They find a film in a case that is extremely bizarre and continually says â€œI am the possessorâ€. Maggie passes out at a scene in the film that she has saw in her dream. She then finds out the history of the movie, the man who made it, killed his family and himself on stage as it played in the background. Her mother gets another phone call, this time saying â€œI am the possessor, I want her! I want her!, knowing where the voice is from, she goes to the movie theater to investigate, where she ends up being murdered. Not knowing of what the previous night entailed, Maggie gets ready for the big night at the theater. A strange man who recites the possessor movie buys a ticket off of Maggie, she tells Toby (a boy from her cinema class she likes), he tells her that she should call the police. Making fun of him, saying that they wouldnâ€™t believe her about a man who was supposedly dead. One by one, each member of her class is killed off, but not knowing who the killer is because whoever it is, is replacing the dead bodies with themselves and making it seem like theyâ€™re alive. The power ends up going out because one of the deaths involved electricity.

Maggie is behind the stage, in the dark when a man grabs her and is taken to the basement, then the power comes back on and the movies continue to play. Being tied up to some sort of device that holds her head in place, she discovers the killer is Toby, stealing peopleâ€™s faces and making Maggie believe he is everyone. She finds out the reason for his killer is when the possessor was first shown in the theater that Toby was in the first row and has been burned because Maggieâ€™s aunt set the theater on fire, leaving him not only burned but also extremely disfigured too. She then finds out that the man who made the possessor was actually her father. Her aunt is actually still alive and Toby has her right behind the screen, to get ready to finish what Maggieâ€™s father was unable to do. He sedates Maggie and puts her in a cast with a dress over it, getting ready for their final scene. Now on stage, everyone believes it to be a joke laughing at Maggie because they think itâ€™s all an act. The only person to discover the truth, Mark, then crashes onto the stage using the fly prop from one of the films they were showing. Mark knowing who Toby is, then frees Maggie and kills Toby with the fly. The police and ambulance end up showing up and BAM! Movie is over!

This film is considered to be the predecessor to the Scream franchise, which is clearly seen, is parts of the film. Itâ€™s one of the most underrated films I can think of, but itâ€™s one of my favorites. Thereâ€™s something fun about it and it didnâ€™t lose the seriousness either, keeping true to what they wanted to execute. With next to no gore and no skin showing, Thereâ€™s just nothing to hate about this film, period.