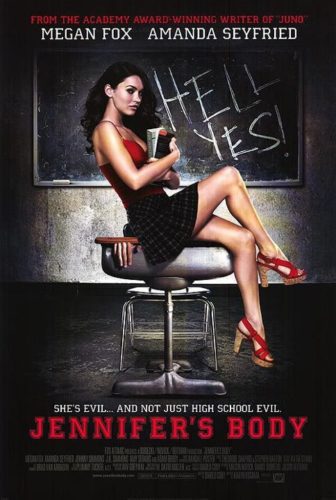 My favorite horror comedy is the 2009 film Jennifer’s Body. The film tells the story of a nerdy high school girl named Needy, played by Amanda Seyfried, who goes out one night with her popular best friend Jennifer, played by Megan Fox. They then meet a band from the city and they end up luring Jennifer into their van after the bar they’re in gets set on fire. This worries Needy. When Needy returns home, Jennifer shows up all bloody and acting very different. Eventually, the bodies of some of the guys in the girls’ high school start piling up, and Needy suspects it’s Jennifer. Needy then sets out to discover what happened to Jennifer that night and why she’s committing these murders. Can she save her classmates as well as her best friend?

A lot of the time when I read people’s thoughts on Jennifer’s Body, it’s fairly negative. I personally love the movie. It has a nice ‘80s horror storyline and feel to it, and it has the humor of writer Diablo Cody, most famous for being the writer of Juno. The film isn’t scary, but it has some of the right horror elements, and throw in the fun, witty dialogue, and fun characters, and you have a fun horror comedy. The film has many great one-liners that I still quote while watching the movie, and they’re all pretty humorous. The acting by Amanda Seyfried was solid, honestly I’d like to a role that Amanda can’t do. One of the most impressive things about it for me though was Megan Fox. She actually didn’t do that bad of a job here, and she didn’t looks as fake physically here either. However some may argue that Megan basically played herself, which could very well be true. Jennifer’s Body is one under looked horror comedy that just does not get the credit it deserves for being a dark comedic gorefest.