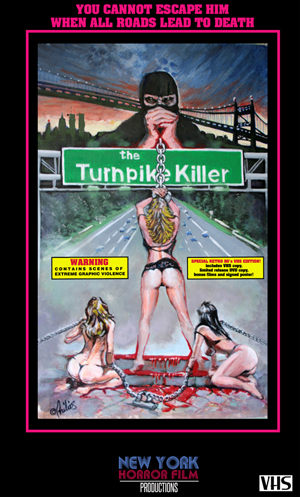 Powered by a tour-de-force performance by Bill McLaughlin in the title role, “The Turnpike Killer” is the rare horror movie that actually made me feel disgusted and revolved while I was watching it. I don’t mean this as a criticism as I feel this is exactly what the filmmakers had in mind while they were making this grimmy little gem of a Grindhouse flick. The movie won’t win any awards for originally (“Maniac” followed a similar formula and had overall better production values) but you can tell that the people involved in this film did everything in their power to shock and revolt their audience. This is a film that I won’t soon watch again but it is also a film that I won’t soon forget. â€Ž”The Turnpike Killer” is sick, twisted and depraved. In other words, everything that I wanted it to be. For those of you that love your exploitation hardcore with a wicked edge, this is the one for you!

If you order through the website below you can receive the flick uncut on VHS and also include a limited edition DVD featuring uncensored cover art and the two bonus movies: Donuts and a Double Homicide – The Making of a Micro-Budget Horror Movie in New York City â€“ a full-length documentary about the making of The Turnpike Killer and Devil Moon â€“ a throwback to classic werewolf movies and other cult ’80â€™s favorites such as The Monster Squad and the original Fright Night.