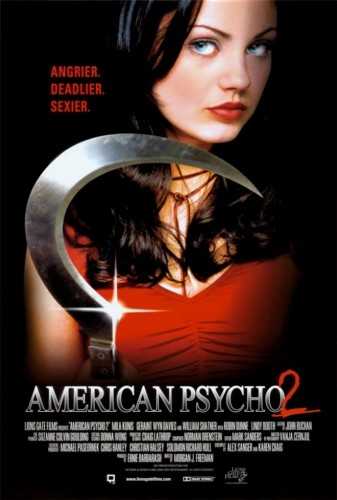 How do you fuck with the minds of those who enjoyed the film American Psycho? How else can William Shatner embarrass himself? Well if those questions ever entered your mind, than here is your answer.

This sequel to the hit film starring Christian Bale(pre-Batman)is more of a loose sequel, only referring to Patrick Batemen in the beginning(and having a guy masked up to play him). While the film ends with us questioning the sanity of the man we have been watching for over two hours, this throws that all away by just claiming he actually did kill people and that it left its mark on a little girl to grow up to be Mila Kunis(post That 70’s Show) and than to top it off she becomes fascinated with her college professor, while studying to be an FBI agent.

William Shatner doesn’t have a lot to do in this film, as he merely is the motivation for why the character begins knocking off a few of the other students, using her knowledge of the way the FBI does things to cover it up(which could have been an interesting concept if it wasn’t thrown out so quickly).

I caught this on late night cable and was sickened that this film was even tried, they didn’t even have the common respect and courtesy to involve the original films author at least write the script(or maybe they did and he refused). Its really just a bad way to capitalize on the success of the previous film and to add the sex appeal Mila Kunis adds. William Shatner is just the big name they managed to get in hopes of having history repeat itself(by this time Bale had become something).

I would suggest if you wanna own it by it as part of collection of films, this way you get your money’s worth.