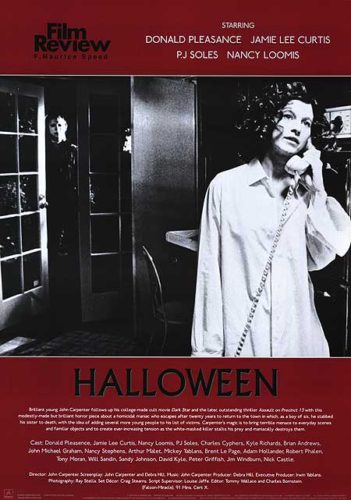 The film starts out on Halloween 1963 when an unseen person sneaks into the home of a young teenage girl. The stranger puts on a clown mask and proceeds to the teenâ€™s room and stabs her to death. When the stranger leaves the house, we see a car pull up and a man pulls the mask off revealing 6-year-old Michael Myers, who has just brutally murdered his sister. 15 years later Michael escapes Smithâ€™s Grove Sanitarium and returns to his home town of Haddonfield, Illinois. It is here where we meet Laurie Strode (Jamie Lee Curtis), and her friends Annie (Nancy Loomis), and Lynda (PJ Soles). Throughout the day we see Michael stalking Laurie and her friends, even to the home where Laurie is babysitting. During this time, Michaelâ€™s doctor Sam Loomis (Donald Pleasance), is hot on the trail, along with Annieâ€™s dad Leigh Brackett (Charles Cyphers), to stop Michael once and for all before the three girls discover the real trick this Halloween will be to stay alive.

Right from the opening credits of the movie, it gives a clear sign this movie will be suspenseful. To this today, the famous score for Halloween still gives me the chills. In my eyes, Halloween is the perfect horror film. We are given characters that we get to know pretty well before they bite it. Itâ€™s also a movie where it relies completely on suspense rather than blood, gore, and an over abundance of jump scares. It gives us a fear of the unknown and tops it off with an actually creepy score. In horror films today, that is either rare to non-existent to find. Hands down the creepiest scene in the movie and maybe even of all horror movies is when Laurie has just discovered 3 dead bodies and is crying in front of a dark doorway. Suddenly the figure of Michael slowly emerges from the darkness with the eerie score playing the background.

I could go on and on about this amazing film, but that would take quite a bit of space. As far as itâ€™s sequels, I, for the most part enjoyed them. However, I thought Part 6 sucked, and I have no interest in seeing the third. Rob Zombieâ€™s versions, I also find very good and well-done, but does not compare to the original and it’s greatness.