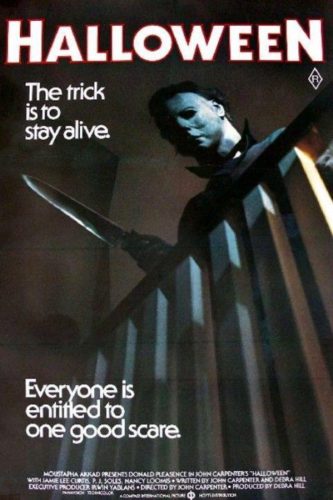 If you are a horror film fan, or just a film of fan period you know what John Carpenter’s halloween is, and even if you haven’t seen it then you have heard of it. It’s one of the best films period, and my favorite horror film of all time. No horror film or any other John Carpenter film tops this film.

15 years ago, a six year-old boy named Michael Myers killed his older sister, Judith Myers, on Halloween, and 15 years later people of Haddonfield, IL still remember what happened, remember the house, and the name Michael Myers. In 1978, Michael Myers escaped from a mental hospital, and targets three teenage girls, Laurie, Lynda, and Annie. Can his doctor, Dr. Loomis, get to Michael before Myers gets his three targets on what is consider to be one of the darkness nights of the year…….Halloween.

In my opinion, no horror film tops John Carpenter’s Halloween. I love a lot of horror films, and everybody has their opinion on their favorite horror films. But John Carpenter’s Halloween is the best when it comes to horror films. First, I love the atmosphere in the film with the mix of that creepy and simple music score from John Carpenter. That score has become so well known that when people hear it they know where that music has come from. Second, I love the point of view shots in this film especially in the beginning of the film and the point of view shots from Michael Myers. I think that creates something creepy and effective in the film. Third, I love that John Carpenter and co-writer/producer, Debra Hill, went for an unknown cast in this film and of course I am glad they went for Jamie Lee Curtis (Laurie Strode) who went on to have a great career and she is the daughter of Janet Leigh, who was in another classic horror film, Psycho, from 1960.

I also thought they really picked three great women who played likable teenage girls. Of course, you can’t forget Donald Pleasance who played Dr. Samuel Loomis. Great acting and role for Pleasance. Fourth, I love that they put the film on Halloween, which some people might consider to be a evil day where ghouls, and spirits come out to play. I think it creates something creepy having the film take place on Halloween. Fifth, Michael Myers himself. You have that creepy movement that Myer’s has in the film, and of course the mask which is a very simple white mask. But still there is something creepy about that mask that you never forget. Carpenter is able to make that mask creepy with some classic scenes like all of a sudden seeing the mask appearing from a dark room. It’s affective, and works well. After Halloween, many sequels came out and Rob Zombie has made his version of what Halloween is with Part 1 and 2. But none of those Halloweens films and no other horror film top Halloween.