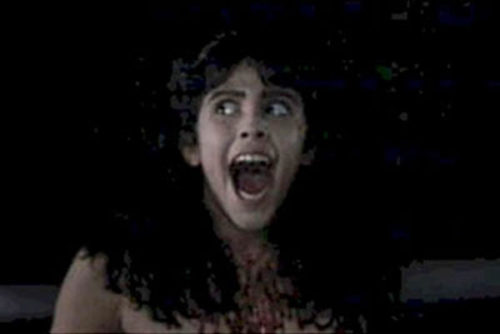 Nothing makes a great horror film like a strong, powerful lady, and this genre is ripe with unbelievable female characters who fight, strike, and often kill the slashers and monsters who relentlessly pursue them. And while people may often think of the women in horror as the victims, one classic slasher franchise gave that notion a sex change operation (so to speak) and reminded us that not all ladies in horror are exactly what they seem. After all, the 80s was the decade of the slasher and no lady-killer had a higher body count than Angela Baker, the Angel of Death, in the classic â€œSleepaway Campâ€ films.

There are plenty of things to love about these four slasher gems, and each film has its fair share of gore and surprises. But the real reason that the â€œSleepaway Campâ€ series is a favorite amongst genre enthusiasts is the loveable, hilarious and oddly innocent nature of our female killer Angela.

The role was originated by now cult horror favorite Felissa Rose, and I think itâ€™s fair to say that she owes her career in horror to â€œSleepaway Camp.â€ Her performance in the original film is excellent, luring us in with her doe eyes and gaining sympathy of the audience as the story unfolds. The most impressive part of her performance is the fact that she was only in her early teens during filming â€“ an age that is rarely seen in horror movie actresses nowadays.

In â€œSleepaway Camp 2: Unhappy Campersâ€ and â€œSleepaway Camp 3: Teenage Wasteland,â€ the character of Angela is played by Pamela Springsteen, who really brings it to the next level of wackiness and honesty. This may be an unpopular opinion, but â€œSleepaway Camp 2: Unhappy Campersâ€ has some of the finest acting that Iâ€™ve ever seen in a horror film, lead by Springsteen as the delightful and ruthless Angela Baker. Her performance is incredibly believable, and while there are plenty of corny one-liners, they certainly donâ€™t detract from the humanity she brings to the characterâ€¦right before she chooses you for death, of course.

Which brings me to the kills. Iâ€™ve got nothing but love for Jason, Leatherface and the like, but Angela Baker definitely pulled her weight in a decade that was otherwise ruled by the men in masks (and fedoras). And the body count wasnâ€™t the only thing that she brings to the table, but the method of execution with Angela is always surprising and itâ€™s never pretty for the victims. Sure, sheâ€™s slashed her fair share with the knife and axe, but how about the boiling water? The kitchen cleaner? The outhouseâ€¦Angela Baker doesnâ€™t mess around when it comes to brutal murder, thatâ€™s for damn sure, and why would we have it any other way?

There are so many amazing women in horror, and Angela Baker is no exception. Thereâ€™s something to be admired about a woman who is not afraid to slash in this genre, and I couldnâ€™t possibly recommend this series to anyone who hasnâ€™t seen it. After all, Angela Baker is not just a woman in horror, sheâ€™s THE woman of horror!